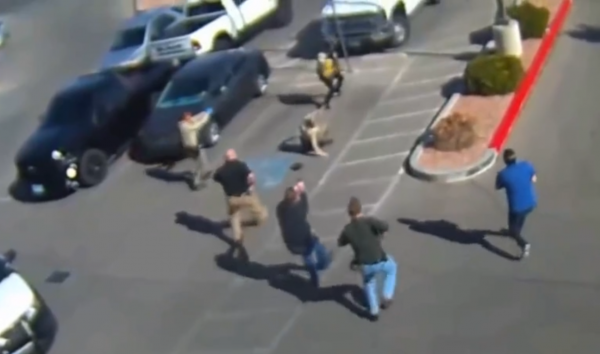 Screenshot via Rumble
May 4, 2022 By Jack Shepherd

A Las Vegas man attempted to steal from a Conceal Carry class, stabbed a police officer, and was then gunned down by another officer and 3 class instructors who had escorted him out of the building.

27-year-old Marvin Payton walked into Range 702 in Las Vegas and attempted to steal a handgun from a bag inside one of the facilities’ classrooms while a Conceal Carry course was being taught. Payton was caught in the act by the owner of the bag and was then confronted by not only the bag’s owner but by several other students and an instructor.

When the police arrived Payton immediately began to resist arrest and attempted to flee. Las Vegas Assistant Sheriff Brett Zimmerman noted in his press conference that Payton kept his hand inside of his pocket while attempting to flee.

Payton drew a screwdriver from his pocket and stabbed one of the police officers after being unable to get away from the police.

Shortly after one of the officers collapsed from the stab wound, Payton attempted once again to flee. The officer that was not wounded drew his firearm and 3 staff members from Range 702, who were still outside at this point, drew their firearms. Payton was then gunned down by the group.

Payton sustained 14 bullet wounds and did not survive his injuries. The injured officer suffered several stab wounds and a broken facial bone, her name has not been released to the public but is expected to make a full recovery. Officer Andrew Nguyen, who was not injured in the altercation, has been put on paid leave pending departmental and district attorney reviews of the shooting.

Las Vegas authorities released a video showing the death of Marvin Payton who was gunned down by 4 separate individuals after attempting to steal from a Conceal Carry class and stabbing a police officer.

I have zero sympathy for him . Play stupid games win stupid prizes

Well, you reap what you sow. Apparently he’s pushing up daisies now.

The leading news agency reported that it was really Payton’s bag, and that the white dude stole it from him. The female threw herself into the sharp end of the screwdriver and therefore injured herself. This was clearly a case of white supremacy, and they were picking on this poor innocent black man. :-😊😊😊

Sad that police have to wait until one of their own is seriously injured or killed to address a threat, lest they end up like Derek Chauvin.

“Gunned Down” that will work!