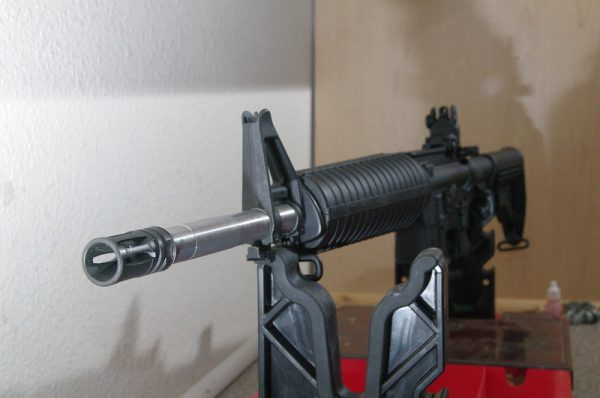 The gun grabbers would have you believe that not a single person on earth needs an AR-15, today there is at least one woman who would probably disagree.

A Florida woman who is pregnant recently found herself staring down a pack of criminals and was forced to defend herself from these violent thugs while using an AR-15.

Two violent thugs broke into a home in the Tampa Bay area this past Wednesday around 9:00 PM. The men grabbed the homeowner, Jeremy King, and held a pistol to his head threatening him. One of the two men soon grabbed his 11-year-old daughter while the other began to violently strike King with his pistol and his feet.

The pregnant woman, King’s wife, heard the commotion and came out of another room with an AR-15. According to those at the scene Mrs. King was not going to let her family be the victims of such a violent crime.

The pregnant woman immediately opened fire on the thugs and wounded one. The two men abandoned any plans they had and fled on foot. One of the two men was found in a nearby ditch no longer after police were dispatched, when authorities found him he had already bled out. The other criminal managed to evade the police and he has remained unidentified.

This is a wonderful story, the good guys one. While it’s never a guarantee that the good guys will win in situations like this, even when they go above and beyond to ensure the odds are in their favor, it is always good policy to stack the deck.

Actions like those the criminals took are not uncommon, in fact, they are happening in ever-increasing frequency. While crime is on the rise in America, the powers that be are looking to strip away your ability to defend yourself.

It’s not a wonderful story. Not until the 2nd perp is captured.

[…] Joe Biden very famously said in 2013 that his shotgun is more adequate for self-defense than an AR-15. Biden suggested at the time that firing off two shots from a shotgun as a warning is going to serve as the only self-defense that you need. No real need to dive into why this is nonsense. […]

I love stories with happy endings.