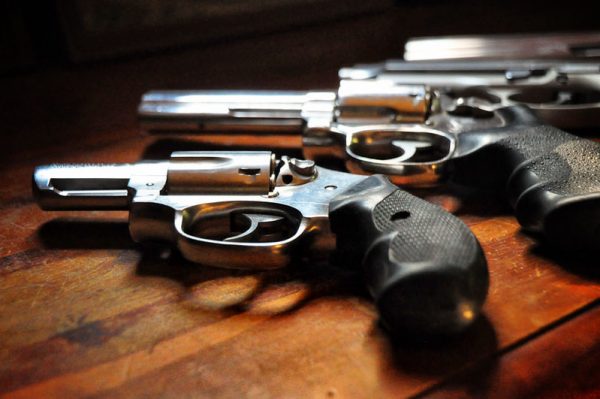 Revolvers laid out on a table / Photo by Rod Waddington on Flickr
January 4, 2022 By Jack Shepherd

The Justice Department has announced its new Federal Gun Control rule that is aimed at ensuring gun owners have secure storage devices. The new rule will require that all federally approved arms dealers will be required to have firearm storage and safety devices available to consumers onsite for potential buyers as required by the Gun Control Act.

The Justice Department has defined gun storage devices as any sort of lock box, safe, or storage device that can only be unlocked by means of a key, combination or similar means.

This rule change was submitted to the Federal Register and if approved, would go into effect in early February.

As reported by the Washington Times:

Attorney General Merrick B. Garland said the change is meant “to reduce the risk of firearms falling into the wrong hands.”

“Gun safety is a Department of Justice priority, and we will continue to take all appropriate steps to help reduce the number of people killed and injured by the misuse of firearms,” Mr. Garland said in a statement.

Lars Dalseide, spokesman for the National Rifle Association, told The Washington Times in an email that the gun-rights group “has always supported the safe storage of firearms.”

The rule comes one month after the parents of (Name of Alleged Shooter), the 15-year-old accused of fatally shooting four students at Oxford High School in Michigan, were arrested and charged with involuntary manslaughter because, authorities say, they failed to secure the gun he used in the killings.

This is nothing new from the Biden Administration. This administration has had a hard time working with Congress passing anything meaningful in regards to gun control legislation and so they have moved on to making changes via the bureaucracy. The bureaucracy, that mythical 4th branch of government that gets to make as many pseudo laws as they please all without the input of the Americans these rules affect.

This legislation is going to mostly affect gun stores, as these stores are going to have to immediately scramble to buy new safes and storage devices for those guns already in their inventory. Supply chain issues and inflation are going to make this very difficult, this goes without mentioning that this rule change could be coming with only a month’s notice.

Gun control has proved unpopular and many of its loudest supporters have become quite ahead of the midterms, unfortunately the Biden administration will retain control of this back door solution for at least another 2 years.

The FOUR most ignored words in the U. S. of A. CONSTITUTION: “SHALL NOT BE INFRINGED”!!

You just can’t fix STUPID!! The Brandon regime only wants to punish LAW ABIDING CITIZENS with more and more ill conceived regulations. Here’s a novel idea, DEAL WITH THE CRIMINALS INSTEAD OF KISSING THEIR BACKSIDES YOU BONEHEADS!!!

“Gun safety is a Department of Justice priority, and we will continue to take all appropriate steps to help reduce the number of people killed and injured by the misuse of firearms,” Mr. Garland said in a statement.
How about focusing on prosecutors who let criminals back on the streets to repeat offend? Oh I forgot. They are too busy spying on soccer moms at school board meetings.

Every time someone shoots someone, lefties make a new rule or law that oppresses more than a hundred million peaceable, lawful private owners. It doesn’t seem to matter that shooters almost never are licensed or otherwise legal or private owners. On the other hand, errant shooters generally are deranged or known criminals with rap sheets.

Why don’t lefties increase pursuit of and punish deranged people or known criminals? And why do they increase control of lawful people? Votes of course. They hope to control the lawful, peaceable people in order to buy their votes with an entitlement — permission to own a firearm. Buying votes with entitlements is the heart of democrat strategy.

It sounds like more B.S., if you ask me.

The Founders all proclaimed loudly and often in speeches and writings the Bill of Rights is a documentation in writing of GOD Given Rights no person, whether individual, Government or Government Official shall infringe upon. That means Joe Shmoe down the street, your Mayor, Your Sheriff, your Governor, Your President, your Congress, some Black Robed Tyrant setting on the Judicial Bench, no one, no how, no way may tamper, alter or infringe upon those rights. Time to scrap all gun control laws and all government interference in our GOD Given Rights. Geo. Washington himself said “Firearms in the hands of the citizenry are the teeth of Liberty.”. Time to end Politicians’ Anti Bill of Rights, treasonous actions against our GOD given Rights. If the words calling for abridgement of any right under the Bill of Rights pass any Politician’s lips that person should be denied the right to ever hold even the office of Dog Catcher. The subjugation of any part of the Bill of Rights leads to tyranny and anarchy. Just look at Chicago after over 100 years of Democrat Tyranny.

Watch the full length You Tube “Innocents Betrayed” to see what the biden regime wants to do to us.

“Shall not be infringed.” I guess Old Sniffy either cannot read or maybe the words are too difficult for him to understand.

So which safe manufacturers donated to what politician and how much?

Merrick Garland is no law enforcement guy. He’s a swamp critter plain and simple. As long as they keep ignoring the core issue – that of what’s causing this bad human behavior – shootings will keep happening. Gun violence? How about human violence! Restore the family, go back to Christian values and reinvigorate our love for country and I think the morons in Washington who are against our owing guns would be shocked at the success of this great country. Or maybe that’s what they DON’T want. You be the judge……

The justice department obviously has too much idle time on their hands! Time to give them something else to worry about. We can paraphrase (so no copyright infringement) recipes from government publications like the Army Field manuals. Two specifics I can think of offhand are 1. Improvised Munitions (HOMEMADE EXPLOSIVES) and 2. Booby Traps. Then go to Kinkos or Office Depot and print hundreds of copies.

Remember to include the following disclaimer: “This document is for educational and entertainment purposes only. The author strongly discourages actually implementation of these instructions.”

Now leave copies around gaming arcades and college campus kiosks. You just know some will be unable to resist making and deploying “stuff”.

Watch the full length You Tube “Innocents Betrayed” to see what joe biden would like to do to us. Never, ever give this regime your guns or ammo!

the law abiding citizens follow the gun safety, it is the thugs that are endangering others

Democommies at work once again.

I am an advocate of Safe Storage, and practice Safe Storage, yet I believe it should be based on the individuals needs and means. I am vehemently opposed to any law or mandate making Safe Storage a hurdle to Gun Ownership.

“Locks keep Honest People Honest,” that maxim is one I’ve come to believe in my 61 years on the planet. No safe,Safe,, trigger lock is 100% effective. Given the opportunity, knowledge and tools,.any lock can be defeated by the criminally minded.

The Biden regime certainly didn’t practice Safe Storage of all the Small Weapons the Taliban picked up, so who do they think they are pushing this? F**k them.

That’s such a quotable quote…”the bureaucracy, that mythical fourth branch of government”… that, operates primarily in the “DC-swamp” incestuously, interfering with each & every other branch/aspect of government, undermining the Constitution, at every turn/chance, they get…with the active participation & connivance of the goddamned-Demo(n)©rat-Party & has, now, metastasized into the Deep-State‼️