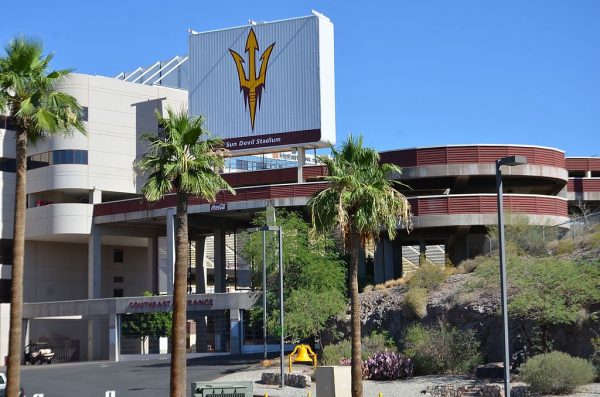 Kyle Rittenhouse was found not guilty in his court case and was able to walk out a free man, the left has now decided that because the courts couldn’t punish for a crime he didn’t commit they would need to punish him.

A spokesperson for the group said, “the goal of these demands is to let the ASU administration know that we do not feel safe knowing that a mass shooter, who has expressed violent intentions about ‘protecting property’ over people, is so carelessly allowed to be admitted to the school at all.”

The group is also now to hold a rally in protest of Rittenhouse being allowed on campus.

Join us and rally against racist murderer Kyle Rittenhouse being permitted on our campus – Wednesday at 3:30 outside the Nelson Fine Arts Center on campus pic.twitter.com/4Hs3JxRqtY

The tweet from the group laid out a list of demands from the school. These demands are:

-Reaffirm the school’s support for the multicultural center on campus

-Establish a “CAARE Center” on campus

These demands are typical of these types of student groups and this list of demands should come as no surprise considering what exactly happened in the Kyle Rittenhouse shooting and how that event unfolded. The school shouldn’t give in to any of these demands but don’t be surprised if they fold on all of them.

At some point the obvious solution becomes torch the place and start over.

Sounds like he will have a possible law suit against the college and that group of leftist nut cases. He was acquitted, he is only going to take online cases, so don’t think they have a leg to stand on!

Sheee, let them find out the hard way.

These are the same nuts that followed Sinema into the bathroom and filmed it. If anyone should be off campus, it would be these looney-toons.

Those particular Socialist Activists need to be charged, tried, convicted and sentenced for violating his Civil Rights.

Socialists have dumbed-down all the U.S. campuses. The socialist seeds were sown at least sixty years ago. It’s a miracle that their organizations have not progressed further than the modest skirmishes we see every week or so. Kyle should pursue and finish this one course at ASU and let the chips fall. Justice demands that he exercise all of his constitutionally guaranteed freedoms and woke warriors need to learn that a successful republic requires all kinds to be fully successful.

Socialist students beware, it is you that needs tending to!!

When I was in college no one of my peers was as stupid as these kids. . .true I was on the GI Bill of Rights college plan, but at least the school should have at a few real men in the leadership that can and would tell them to shut up and would assist them in that plan if necessary. Young Rittenhouse had been asked by a car lot owner to help them keep arsonists away. Also he lived only a short distance away and If I understood also worked in the area part time. But he had every right to be there since he was asked and he had his rifle mainly to prevent mainly what happened and it would have been a success except the rioters turned ut to be harden criminals intending to use the commotion to steal not young people protesting. The young man was attacked with a skate board over his head and only fired to save his own life when the armed men aimed at him (one actually fired (and missed) We are a nation of laws that served him as it should have. When the evidence was presented it was obvious he was innocent.

Too many people in America including the youth watching and believing fake media that lies all the time, being gullible is not a great virtue, finding and accepting the truth is.

Its amazing that because Kyle is white and not a Democrat he has been made a scapegoat for all the Dems who only follow laws that they want to follow. Trump is a good example of how being a Republican makes him a bad person in the eyes of dumb non thinking Dems. The Dems motto is “If we don’t agree with it is is wrong?. Our country is divided on political lines with the non thinkers being in charge and trying to force all their madness on non Democrat’s. We have to vote the Dems out of office as they do not deserve to be there. No matter what Biden does he gets away with it.

Kyle was a Yang supporter so I would not say he was not a DemonRAT. He may change after the treatment he will be receiving from them now and in the future but you cant say he was not a young and dumb demonRAT.

When the rulings of the courts do not meet the wishes of the gangsters, then simply go out and riot or kill the messengers. Kyle may probably never be seen as not guilty and as a result more innocent people will get convicted and as a result more guilty people will be judged as not guilty. The justice system is crashing as we watch and suck our thumbs. Is America becoming a gangster run country that cannot survive.

Well. they can defund these students who refuse to accept the decision of the Rittenhouse court and the bonified jurists who reach the decision they denounce, refute, and challenge. We can easily cure these detractors who fabricate hair-brain allegations regarding their fears by suspending any of their foundation/tax-subsidized-schooling benefits. Then they will better understand what their supposed feeling of insecurity really amounts to in real time should they violently demonstrate, damage property, and disrupt classes

It’s amazing how spineless these universities have become folding to these irrational childish demands. I have heard that they have kicked him out already so they folded faster than superman on laundry day. I hope he takes the University and these commy students to court and sues their pants off.

A Fields
Reply to  Fred Tran

Correction. These universities have not “become” spineless; they have BEEN spineless, for decades.
Read Bork’s Slouching Towards Gomorrah. He was on the campus of Yale in the 60s and gives a great account of the way the administration 60+ yrs ago catered to the radical Left, even then.
We need to cut ALL State Funding to Universities: ALL!
And that means NO federally backed Student Loans.
NO Federal Grants.
NONE.
All we are getting is indoctrinated youth.
WHY should the “producers” (those that pay taxes) PAY for that?
We should not.
Until we do that, this situation will only get worse, and worse, until the rabid crazy Left cause us to devolve into a civil war.
NO ONE on the Right wants that (those on the Left do) but we know who will be left standing after it is over.
Problem is, it will still mean massive loss of life and resources and for what?
To satisfy the temper tantrums of toddlers?
No, we must end University funding NOW and hope we pull out of this nosedive into bloodshed.

Every exclusionary Stalinist should be expelled & charged with hate crimes.

Perhaps the socialist students should be booted out instead? Cancel them with a dose of their own medicine.

These little socialist brats need to move to another country

These lefties are all worthless idiots and should all be locked up!

i cant say what i want to. But the commie students should get a life or leave school . the boy was found innocent end of story. he’s not even going to come on campus, its virtual. not only that how is shooting two white men racist confused on that one.

Tell the group to STFU first, and then explain in simple one syllable words why Not Guilty means Kyle is Not Guilty.
Quit bending to pressure from these Byproducts of Assholism. Let them Protest, until the next Cause dè Celebritè grabs their attention in another week or two. Then they’ll be right back to their Tree Hugging Bunny Sodomy ways.

If America was a socialist nation, those Sun Devils would be forced to work. They’d hate socialism if they knew it requires everyone to work.