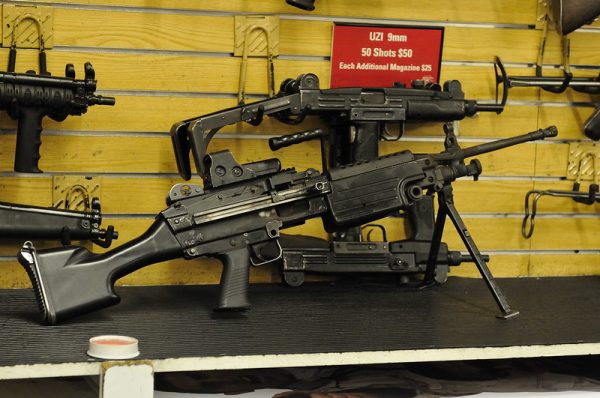 M249 and Uzi on display at a gun range / Photo by Michael Saechang via Flickr
November 30, 2021 By Full Mag Staff

Crime doesn’t pay, these LAPD officers involved in the gun-running scheme are now learning that after they spent years teaching others that lesson. LAPD officers were buying law enforcement-only handguns in the state of California, where every handgun needs to be approved by the government before it can be bought by civilians, and then reselling them to civilians under the table.

Before it all came crashing down, Archi Duenas’ gun-stealing scheme was relatively simple, county prosecutors wrote in a memo. He just couldn’t go on vacation.

Duenas, manager of the gun store at the Los Angeles Police Academy, had been reprimanded over the years for tardiness and sloppy record keeping, but he never took time off, according to the memo. As the store’s closing supervisor, he was there each night to lock up — and hand count the inventory.

The resulting investigation quickly led to Duenas’ arrest. But it also uncovered a larger scandal inside the LAPD: The clientele for Duenas’ stolen weapons included cops.

LAPD and L.A. County District Attorney records and interviews by The Times show that what started out as a probe into Duenas has spiraled in the last year and a half, spurring a cascade of allegations of criminal activity, misconduct and corruption on the part of officers and commanders.

The California law that dictated what handguns can be sold to the general public is a travesty, but that doesn’t mean you get to break the law. If this law didn’t exist, there would never have been a reason for these straw purchases to have been made and no crime would have ever been committed as those who wanted the handguns would have simply bought them. It is not as if the police were selling these guns to criminals, they were selling them to friends and family who just wanted to get their hands on some recent handguns.

What makes this scandal so much worse is that Archi Duenas, the gun store employee who stole guns in order to resell them, is going to walk. The ultra-progressive prosecutors of Los Angeles are going to give him a sweet-heart deal and he is going to get probation instead of jail time.

The effect of this scandal will likely be more gun control in the state of California, advocates will move on some sort of governing board to oversee the operations of gun stores and new regulations will be put in place that will make running a store like this even harder.

The ideal solution that any reasonable person can come too, is to simply abolish the handgun approval law California has. That is nothing but a pipe dream though, the ultra-liberal state will just tighten the gun laws even more and create even more incentive for illegal activity.

Of course
It’s Californnication where everything is screwed up

TYPICAL. In a state where they scream the loudest about gun control they catch dirty members of law enforcement red handed and what do they do. A slap on the wrist. This is when you should grow a pair, throw the book at them and start penalizing those who break the laws already in existence. If you don’t enforce these laws, what makes you think any new laws will be any better. You have got to punish those that break the law, its that simple. There have got to be consequences for peoples actions. This should start with parents at a young age but that seems lost in this day and time. California ,I am afraid your troubles will continue.

The current administration does not enforce federal laws on the southern boarder.
so why enforce any?

Wrist slap time for these scoundrels. But that would be a shame because as the nation’s role models for law and order, they should be tried and punished to the fullest extent.