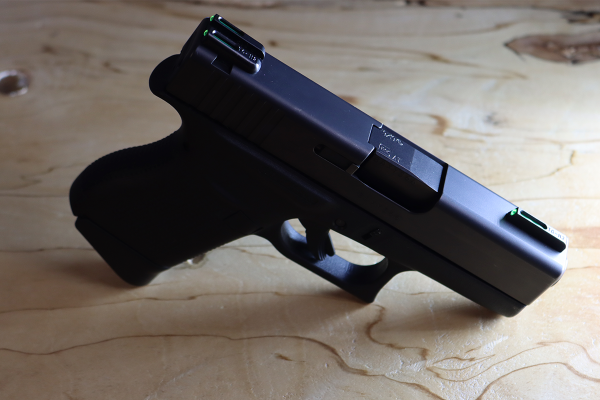 Stylized photo of a Glock 43 / Photo by Grace Boatright
November 18, 2021 By Jack Shepherd

Dick Heller, of the famous DC v. Heller, threatened DC with another legal challenge and the city bucked.

Heller sued the city of DC over a recent ban on so-called “Ghost Guns”. DC’s “Ghost Gun” ban was tougher than similar bans in other cities. The legislation in DC outlawed the manufacturing of firearms in the district and the wording of the legislation banned Polymer-Framed firearms, this could have hypothetically included Glocks and certain ARs.

In the lawsuit filed by Heller, it was argued that the city effectively outlawed the handguns that it had issued to officers. This was an important point to make considering that this legislation stretched the definition of “Ghost Gun”.

“The District legislation in question is so poorly thought out and written that the City Council has managed to criminalize the possession of a vast array of popular, common handguns that it regularly allows residents to register, including the very handgun it issues to its police officers,” read the suit.

The city backed down from its initial legislation in two major ways.

The new language of the legislation outlaws firearms that are undetectable by metal detectors, this is in line with federal law and such firearms are already illegal.

The legislation now contains a provision for city residents that want to make their own firearms, the city will allow residents to make a firearm at home so long as it is otherwise legal and they give the firearm a unique serial number.

The move by DC to rectify their legislation was more than enough for many gun owners but not for Heller himself. “DC only passed an emergency measure; it still has to permanently repeal the offending provisions,” Heller said in a statement. He followed that comment up by saying “I still have a claim for monetary damages for the violation of my Second Amendment rights.“

The DC city council will have 225 days to permanently make these changes to the law and this timetable is based on the legislative process of the city.

DC Mayor Muriel Bowser opted not to comment on this issue with any outlet.

Heller also said in a statement that “a person can build what they want in their garage, boat, furniture, car, firearm, airplane, anything else… city council members and legislators everywhere need to be held liable, personally, for these infringements.”