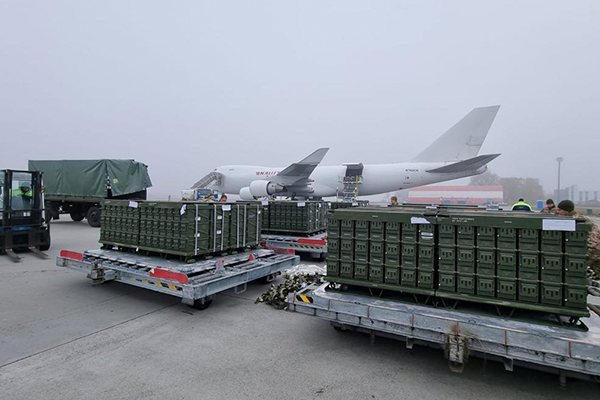 An Ammo Shipment from the US to Ukraine / Photo from the US Embassy in Kyiv via Twitter
November 18, 2021 By Jack Shepherd

The US Government has given 88 tons of ammunition to the Ukrainian government as part of a massive defense assistance package.

The US Embassy in Kyiv announced that it has received 88 tons of ammunition from the US that is meant for the Ukrainian government.

This was the 4th package the Ukrainian government has received as part of a massive $60 million defense assistance package.

This deal has undoubtedly come to fruition as a result of the recent increase in intention in the Eastern European region. Russia has become a lot more aggressive in recent weeks and many fear that Putin will make a move to take over Ukraine.

It can’t be from biden, he let Russia take a large part of Ukraine while VP, although his son is on the oil company board of directors from there. Maybe he’s protecting his “10% for the big guy”

Won’t help, when Russia does the “REAL INVASION”, NATO/US will run for the hills when they loose their first jets over Ukraine and get some personnel killed on the ground in Ukraine.

Don’t worry Russia will not take all of Ukraine just 75%, cause there will not be nothing left of the Ukraine military, they will collapse faster than Afghan military did.