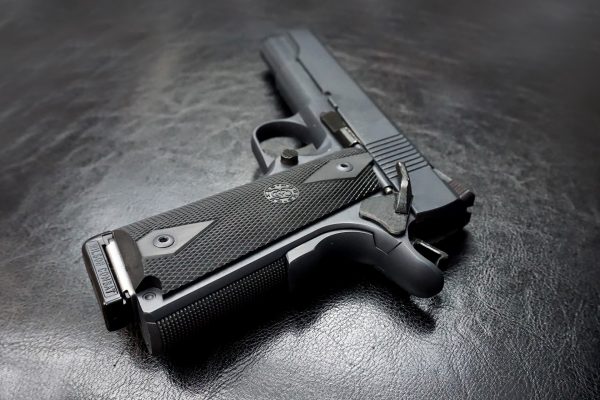 Andrew Weinstein, the chair of the Democrats Lawyers Council and DNC Deputy National Finance Chair, is calling out a pro-gun Jewish group for Anti-Semitism. 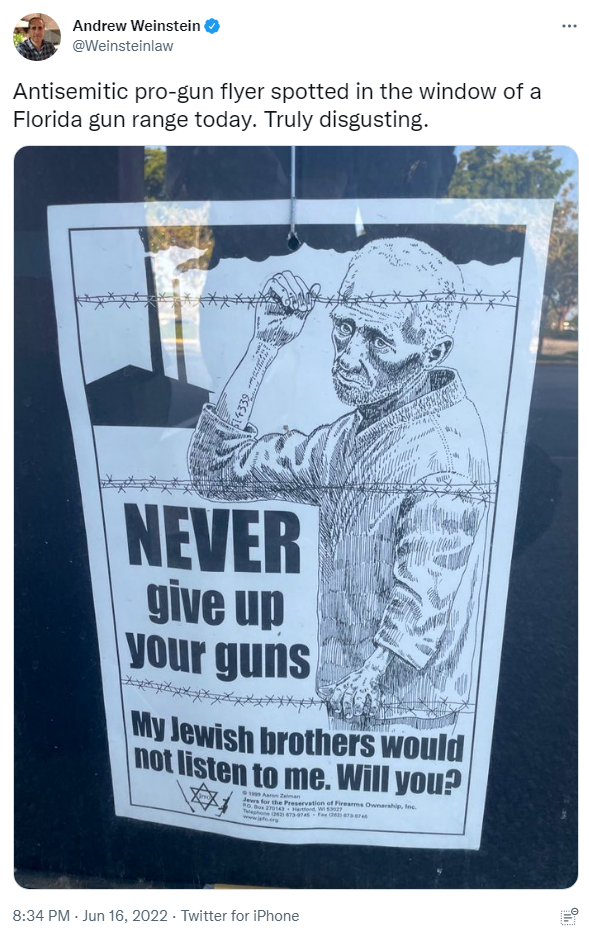 This poster references the gun control policies put forward by Nazi leadership in Germany during the 1930s. The point being argued by the poster is that the Jewish people may not have suffered as much had they kept their arms.

This poster was made by the Jews for Preservation of Firearm Ownership (JPFO) organization. This group is a 2nd Amendment advocacy group created by Jewish people that advocates directly to the Jewish community.

Founded by Jews in 1989, JPFO initially aimed at educating the Jewish community about the historical evils that Jews have suffered when they have been disarmed. JPFO has always welcomed people of all religious beliefs who share a common goal of opposing and reversing victim-disarmament policies while advancing liberty for all. It was the brainchild of Aaron Zelman (1946 – 2010), a leading national civil-rights activist.

JPFO is a non-profit tax-exempt 501(c)(3) educational civil-rights organization, not a lobby. JPFO’s products and programs reach out to as many segments of the American people as possible, using bold tactics without compromise on fundamental principles. Find out how you can donate to JPFO. You can volunteer to help JPFO too.

JPFO has always welcomed people of all religious beliefs (or none) who share a common goal of opposing and reversing potentially deadly victim disarmament policies. You don’t have to be Jewish to join JPFO; you just have to love freedom.

The accusation that this group is promoting Anti-Semitism is ridiculous. It would appear that conservatives of the Jewish faith will be subjected to the same treatment as African-Americans with conservative views. They will be accused of having some sort of internalized “ism” that is the cause of their beliefs.

Andrew Weinstein has also gone to great lengths to cover his boneheaded opinion. For example, the day after he posted this Tweet, he took to Twitter again in the same thread and made sure to get the point across that if you disagree with his take that a Jewish group is Anti-Semitic, you are some sort of Anit-Semite or Crypto Nazi.

Weinstein posted a Politifact article stating, “Let’s make something clear: The Nazis did deny guns specifically to Jews. But, given the size of their forces and their methods of confiscation and extermination, this is a trivial factor. [So] the notion that it would have made any difference is unreasonable.” The point of this “fact check” was to show that it didn’t matter if the Nazis took away the arms of Jews living in Germany during the 30s; they would have won in the end regardless.

Weinstein also posted an article from the New York Daily News that suggests something similar, this time being sure to point out that this “mind-bending” theory being promoted by Republicans was pure non-sense.

Ultimately, we all know why this is the leftist hot take; these individuals do not believe in your right to self-preservation. According to these same political actors, you have no right to defend your property, your loved ones, or even your own life regardless of what religion you follow or what your ethnicity is. Canadian Prime Minister Justin Trudeau made that pretty apparent while introducing a wide-sweeping ban on handguns the other day.

Andrew Weinstein also isn’t one for taking criticism or opinions that don’t line up with him. Mom at Arms pointed out a bizarre set of hidden replies to his original tweet. One Twitter user replied, “I think you misunderstood what antisemitism means…” It doesn’t look like Weinstein took that one well. That tweet, as well as many others calling out Weinstein’s extraordinarily intelligent opinion, have all been hidden by Weinstein.

Perhaps in the future, Mr. Andrew Weinstein should read a little bit more carefully before making a statement that bold in full view of the general public. That or own up to the mistake. Or many even just delete the original tweet and pretend it never happened.