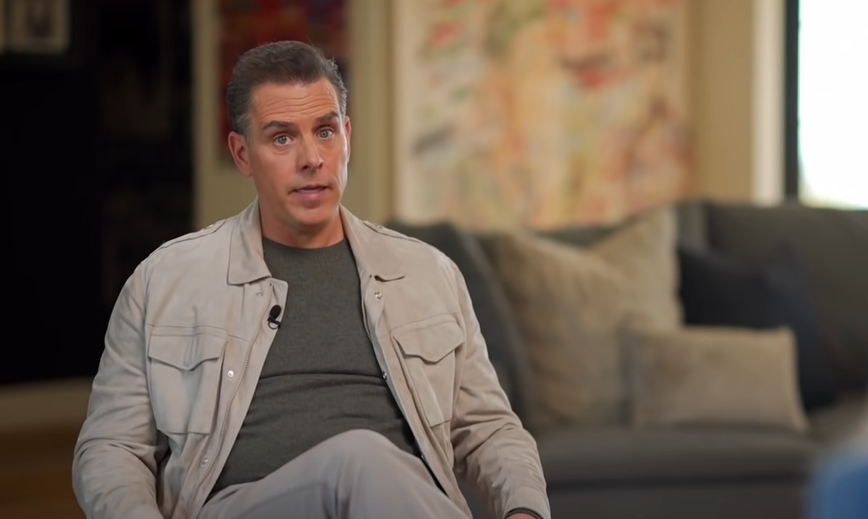 Hunter Biden In an Interview with CBS Sunday Morning about his new book. Screenshot via YouTube
June 15, 2022 By Jack Shepherd

Newly revealed text messages reveal that Hunter Biden berated his sister-in-law Hallie Biden over her throwing away his gun near a Delaware high school in October 2018.

Hunter Biden slammed his sister-in-law because she allegedly presented him as “an abusive pedophile with homicidal tendencies” and that this information was now “in the hands of the FBI.” Hunter berated her saying that because she had thrown away his gun in such a careless manner that the FBI and local authorities were now both looking into him. Despite these claims from Hunter Biden the FBI has denied any involvement in this specific incident.

The attacks went on for a while in the lengthy series of text messages but something interesting did come up. Hunter Biden at one point said that Beau Biden had a handgun in the front glove compartment of his car and that his father(Joe Biden) owned 5 guns.

These are interesting insights because President Joe Biden is on record saying that he only has 2 guns. Joe Biden uses this as a talking point when he pushes for gun control, as to make the point that owning too many firearms is a sign that someone is unfit to own any firearms.

Joe Biden very famously said in 2013 that his shotgun is more adequate for self-defense than an AR-15. Biden suggested at the time that firing off two shots from a shotgun as a warning is going to serve as the only self-defense that you need. No real need to dive into why this is nonsense.

Politico has reported that at the time the Secret Service attempted to retrieve the paperwork from the local gun store where Hunter Biden purchased the firearm. On this paperwork, there is a question that reads “Are you an unlawful user of, or addicted to, marijuana or any depressant, stimulant, narcotic drug, or any other controlled substance?” Hunter Biden would have had to put “No” as his answer in order to obtain the firearm and this means that he lied on the paperwork which is a serious offense.

Lying Bastard! And because he is a Democrat it slides even after they tried to cover for him. So add the Secret Service to the list of Communist Sympathizer’s!!! The civil war is shaping up. At least we can see who is on what side,

Joe Biden is mentally unstable, therefore, he should be “Red Flagged” in the way he wants done to the rest of us. Dementia is proven to cause erratic behavior.
The same applies to his drug addicted son.

Why do I have a gun? Because I am The Hunter.

How dumb do you need to be to act as The President of the United States? Apparently, our president Joe Biden is the leader in stupid. I hope that he is not having health problems and that he is being controlled by the democratic insiders who are trying to use him as fodder for the destruction of this fantastic country. As a citizen who has reached the old age bracket of 82 and still alive and kicking, I am really worried that Joe and his handlers, will destroy everything that we, the real citizens. have worked very hard to establish. Joe Biden is sick; he should not be trying to run this country and beg other countries to help us commit suicide. This country needs the second Amendment especially now when the socialist democratic party and enemies who want to destroy this great experiment are raiding the hen house,

Nothing will come of it.

Not that Joe Biden is any kind of a great leader or person, can you believe Hunter is saying Joe has 5 guns? I don’t believe anything that comes from that family. They are all sick.

So why is he not in prison?

Not a damn thing is going to happen to Hunter or Joe. There’s enough to put Hunter away now! Yet, no charges have been filed. Hmmm…

Biden’s history is nothing but lies……so when he speaks on any subject you can be 99%sure what he’s saying isn’t the truth…just think about the litany of lies. Can he be really trusted to tell you the honest truth?