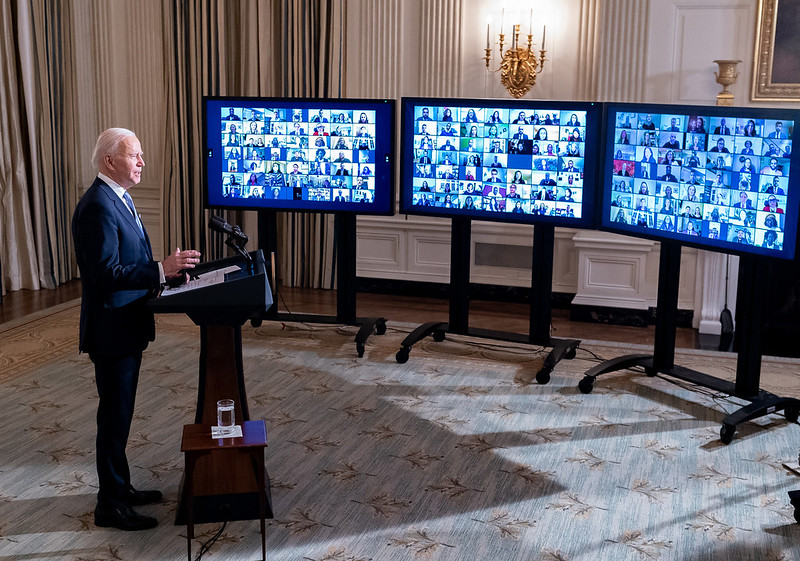 President Joe Biden went to Buffalo, New York in the wake of the mass shooting that occurred there last week. Many expected to see the President push for more gun control while visiting the area, but when Biden got there he said “We have enough laws on the books to deal with what’s going on now.”

Just last week there was a mass shooting in Buffalo, New York at a TOPs supermarket. The shooter killed 10 people and wounded several others while live-streaming his rampage to the live streaming site Twitch. The shooter is now in police custody and investigators have revealed that he was already on the radar of local authorities and the FBI prior to this massacre.

President Biden’s statement came as a shock to many as the expectation was that the President was going to leverage this against Congress to get more gun control passed.

As was reported in WIVB4:

Biden spoke with reporters at the Buffalo Niagara International Airport before boarding Air Force One back to Washington. Biden was asked if there were any executive orders he could issue to address gun violence or whether he thought there was a renewed opportunity for Congress to pass new gun reforms in the wake of the mass shooting in Buffalo.

“Not much on executive action. I’ve got to convince the Congress that we should go back to what I passed years ago,” Biden told reporters. “It’s going to be very difficult. Very difficult. But I’m not going to give up trying.”

“We have enough laws on the books to deal with what’s going on now,” Biden continued. “We just have to deal with it. Look, part of what the country has to do is look in the mirror and face the reality. We have a problem with domestic terror. It’s real.”

Domestic Terrorism Mr. President???? Like the car that killed the Parade goers in Waukesha Wisconsin? What say you, or any of your other minions.

I suspect that Befuddled Biden’s statement was worded that way because his handlers know that ramming more gun control down our throats during an election year would cost the Demon-crats many elections in November.

Never trust what this looney buffoon says. He WILL try to destroy our second amendment rights and stomp all over the Constitution with executive orders, AFT “rule/regulations changes that circumvent the legislative branch, or stealthily enacted laws.

One word to prove it didn’t. COLUMBINE.

Bidet will attempt to still enact draconian gun control measures not matter what he said. He and his regime want to strip us of our firearms, our freedom of speech and then tear all of the rest of our rights away from us. fjb

Someone needs a brain transplant. Only one thing he said is true. We DO have plenty of laws already. This latest “shooter” is a good example. He rather recently had a psychiatric exam and somehow he was still allowed to acquire his weapons. The powers that be just signed off on this guy. Now Hochul has “other” rotten ideas.