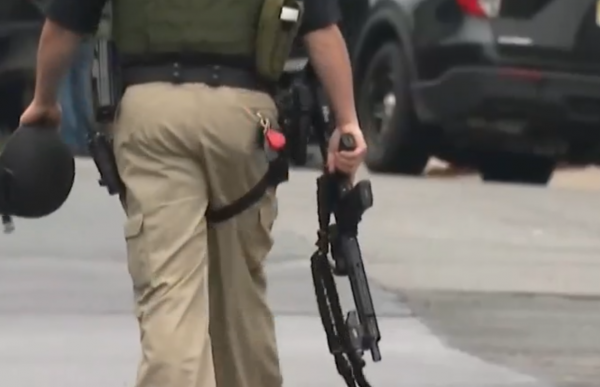 Screenshot via MSNBC New York
May 17, 2022 By Jack Shepherd

New York is ranked as being the worst state in the union when it comes to your 2nd Amendment rights. The state has some of the strictest laws in the country, it has Red Flag laws, background checks, and a version of the Backer Act. None of these measures stopped the Buffalo shooters from killing 10 people at the TOPs supermarket in New York, in order to prevent the next psycho from committing an atrocity they want to create more firearm regulations.

The mass shooting that occurred on May 14th at the TOPs supermarket in Buffalo, New York was a tragedy all too familiar to Americans. The shooter pulled up in front of the grocery store and proceeded to shoot and kill those standing outside of it before going in and killing more people. The shooter surrendered to police when they confronted him.

The shooter prepared a massive 180-page manifesto in Google Docs and live-streamed the massacre on the live streaming platform Twitch. The video was only up for a brief period of time and it has been reported that only 22 people actually watched the attack unfold live. Samantha Faught, an executive at the Amazon-owned company, said that they took the video down in less than two minutes(something that probably isn’t true as  7 minute long versions of an archive of the stream are available online.)

This was a premeditated event, this shooting was planned far out in advance and, according to some sources, the shooter was already on the radar of the FBI. NBC News reported that the shooter has made other threats in the past and had at one point even threatened to shoot up a local school.

A state police spokesman, who did not release a name to NBC News, said the subject of the investigation had been transported to the hospital for a mental health evaluation at the time and was not charged with a crime.

Buffalo Police Commissioner Joseph Gramaglia said that the suspect was evaluated and released and no further complaints were made.

This individual was on the radar of not only local authorities but the FBI. These agencies had the opportunity to stop him and did not, despite having the legal ability to due so. It has been pointed out that the FBI has taken a keen interest in the actions of parents at school board meetings over this individual who made a threat against a school.

The shooter was also reported to have 30-round magazines, something that the state of New York has banned. The fact that these magazines were used in the shooting will lead to pushes for national magazine bans, outside of the fundamental issues with this policy these magazines are already in circulation and little can actually be done to stop their continued proliferation. All a ban in this style would do is turn law-abiding citizens into criminals.

Red Flag laws have also come up in conversations about the shooter, mostly revolving around the fact that these laws failed to stop him. This individual was on the FBI’s radar for making egregious threats of violence and these laws were unable to stop him. This ultimately boils down to a failure of the bureaucracy, government employees failed to follow through on a lead and this resulted in the deaths of several people.

Gun Control completely failed when it came to this incident, the laws in place did nothing and the laws being proposed wouldn’t have done anything either. Despite all that, political activists and career politicians are going to be pushing for more gun control in the wake of this shooting.

Again the fbi and local authorities FALL FLAT on their ASSES when it comes to stopping a KNOWN threat!!

Someone tell me if I’m wrong. Dementia Joe will visit and make a big “gun control” issue out of this whole tragic event, while failing to pay attention to any details that come out regarding the shooter. Just another chance to “not let a good tragedy go to waste.” What a shame how POTUS must use these tragic deaths to promote
measures that accomplish do little.

Check this out. Biden actually said “there are enough laws on the books to cover this” https://fullmagnews.com/2022/05/18/biden-folds-on-gun-control-in-wake-of-mass-shooting/

Yep, just like Parkland, Aurora and most of the other shootings, the Perp should have never been able to purchase a gun because they’re Whackadoodle. The Authorities failed to enter them in NICS as a NO SALE.