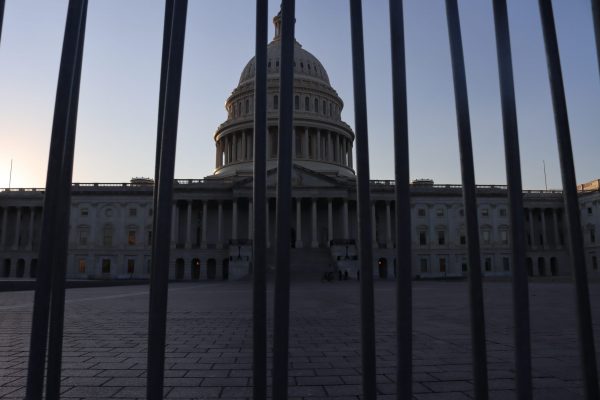 The Capitol Behind Bars / Photo by Chris O'Neil
April 28, 2022 By Jack Shepherd

Washington D.C. is trying something new to solve its crime problem, hiring life coaches for criminals.

It may seem to be a silly idea that should be subjected to ridicule, but I wouldn’t count this out immediately. This new program is an alternative to gun control policy, something none of us are too particularly fond of, and if this actually manages to work then this is a direct alternative to not only gun control policy but to the traditional criminal justice system.

A massive report titled “Gun Violence Problem Analysis Summary Report” from the National Institute for Criminal Justice Reform and the D.C. Metropolitan Police Department found that most of the gun crime being committed in the city was perpetrated by a very small number of people that were already known to law enforcement.

The report found that this very small group of people was responsible for virtually all of the crimes in the city. Not only were these individuals perpetrating crimes, but these individuals were also already known to law enforcement meaning that they were repeat offenders. The report found that “In Washington, DC, most gun violence is tightly concentrated,” and that those involved, “share a common set of risk factors, including: involvement in street crews/groups; significant criminal justice history including prior or active community supervision; often prior victimization; and a connection to a recent shooting (within the past 12 months).”

Earlier this month, D.C. Mayor Muriel Bowser announced that the city would be creating a new program on the back of this research. This program will involve a multidisciplinary team being assigned to the individuals identified in the report as being responsible for violence in the city. This multidisciplinary team will consist of a Credible Contact, a Pathfinder, and a member of the Mayor’s cabinet.

Credible Contacts are staff from the Office of Neighborhood Safety and Engagement (ONSE), the Department of Parks and Recreation (DPR), the Department of Youth Rehabilitation Services (DYRS) or the Department of Corrections (DOC) who utilize community connections to find individuals in the community and build trusting relationships with them to learn more about risk level, stage of readiness, and service needs. ONSE Pathfinders assist Credible Contacts with service navigation and track outreach and service delivery efforts to measure progress.

It was also announced that the Mayor will be introducing “approximately 20 Life Coaches” to help strengthen the initiative.

What are some of the key issues with this plan?

It is no secret that the government of D.C. has a serious credibility problem, with that in mind many are incredibly skeptical of this idea and believe that this may be some sort of scheme to rob taxpayers.

Cost is another huge issue when it comes to this program. Assigning individuals to entire teams is going to drain a lot of city resources and by that, we mean taxpayer money.

This will also be an extremely difficult thing to sell to the public at large. A good portion of Americans think that the criminal justice system is in need of reform, but the idea of what that reform should be varies from person to person wildly. Some people think we need longer and harsher sentencing, others think we need a new approach altogether and some have a pretty brutal idea as to how we should handle the dregs of society.

Regardless, this is going to be a tough sell. The city is saying that we have to assign entire teams of people to known criminals who they think are going to engage in more shootings, this isn’t something that is going to be popular.

Why this is a better alternative

For years D.C. has been pushing gun control on not only residents of the city but residents of other states. This new proposal should hopefully buck that trend.

The problem of crime, violent crime in particular, is something that needs to be addressed and for years the go-to solution for left-wing politicians in big cities has been gun control. Despite new gun regulations being a constant the problem of crime has only gotten worse.

D.C. has also gone the full mile and actually advocated for gun control in neighboring areas like Virginia and Maryland(although Maryland did not need to be encouraged). Back in early 2020, Mayor Murial Bowser sent a letter to Virginia lawmakers asking them to pass a massive series of gun laws.

These regulations included the criminalization of private firearm transfers and new rules for FFL holders. Mayor Bowser also advocated for the introduction of Red Flag laws in not only D.C. but in Virginia.

Mayor Bowser’s history of advocating for gun control also runs a lot deeper than just trying to get laws passed in her city and the two neighboring states. Mayor Bowser has also advocated for federal gun control regulations on top of blaming Virginia and Maryland for D.C.’s crime problem. When addressing Congress, Bowser said, “In places like Washington, DC where we have some of the strongest gun laws in the nation, we know better than anyone that this is a matter that won’t be solved state by state.”

What you can take away from this proposal

This proposal might work, it might fall flat, or it might just be some scheme to rob the taxpayer. We won’t really know until it’s said and done. That being said this new proposal can be taken as a sign of a brighter future for America when it comes to gun control regulation.

Gun control is becoming less and less popular as time marches on and proposals like this are an effort to do something other than what has been tried and failed. A gun-control advocate like Bowser putting her weight behind this proposal is a sign that some of these people are willing to try something other than gun control and while that does not sound like a big deal, it is a big deal.

If this program is a success, even in a very minor way, then there is a direct alternative to gun control that we can point to. We know gun control doesn’t work and liberal politicians are not going to agree to our desired criminal justice reform, so this might be a decent middle ground.