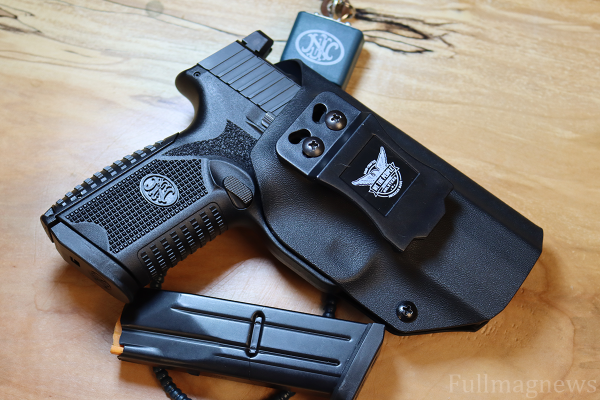 FN 509 Midsize in it's holster with the provided lock and a spare magazine. / Photo by Chris O'Neil
March 2, 2022 By Jack Shepherd

New York Attorney General Letitia James may now have to stop her crusade against the NRA because a Judge has ruled that she can not dissolve the organization.

Justice Joel Cohen of the New York State Court in Manhattan stated that the accusations of corruption being thrown at the NRA mainly concern harm done to the NRA, its donors, and its members and because of that this can be addressed by targeted, less intrusive release.

A major caveat in this decision is that AG Letitia James is still free to pursue other claims against the NRA and individual advocates in her lawsuit, including NRA chief Executive Wayne LaPierre.

A Manhattan judge indicated Friday that he doesn’t believe New York’s attorney general has been illegally gunning for the National Rifle Association.

AG Letitia James filed suit against the gun rights group in 2020, claiming its top executives flouted nonprofit laws by diverting millions of agency dollars to fund their lavish lifestyles replete with trips to the Bahamas, safaris in Africa and jaunts on yachts.

The NRA filed counterclaims alleging that even while James was on the campaign trail, she made comments about going after the group, showing that she had “predetermined” to sue it simply because she disagreed with its political stances.

During a video hearing Friday, Manhattan Supreme Court Justice Joel Cohen said, “The attorney general’s job is to decide what cases to bring and try to persuade a jury or a court.”

While the NRA can not be dissolved by New York Attorney General Letitia James, she is still free to pursue cases against the organization and several of its members.

For those unaware, the NRA has been involved in a massive scandal over the past few years as it is alleged that several individuals inside the 2A organization embezzled money and used donations for personal expenses.

This over 150 year old firearm training and 2nd Amendment advocacy organization has weathered a lot of stormy times in it’s long history. AG Letitia Adams’ misguided and hateful efforts to demonize or defame it will be no more than a minor distraction to the several million members who donate their money and support to the National Rifle Association of America. Their leaders are voted in by a more legitimate process than was used by the Democrats and Leftists in the past National Elections!

My apologies to AG James for using an incorrect name! (Adams)

As a lang timevPatriot Life Member, I’ll be the first to say the shenanigans at the top of the NRA need investigated and changes must be made. I too belong to the other 2A organizations. I hold the view that the NRA must not fail and the membership needs to do our make sure there’s accountability, and that it doesn’t fail. The NRA’s many programs must continue. From training and certification classes to its educational programs. These must continue, as no other group is meeting those needs as of yet.
Changes need to be made and leadership held responsible for their actions.

I am also a long time life member, (joined in 1971, life in 72,) and became a Patriot member a few years ago. That was back when to become a member you had to be sponsored by an existing member or a commissioned officer in the US military. Everything was straight arrow, no funny business.
I agree with you completely, for several years now there appears to have been some funny business going on, and it needs to be investigated and corrected. However I don’t think that it should be done by a racist, anti Second Amendment New York AG!
The NRA has too many programs that are vital to support the 2nd Amendment, and no other organization has anything close to the same clout as the NRA.

NRA should merge with GOA, & other Gun groups for a combined Front

Those other groups were started by people that were fed up with the current leadership of the NRA, I highly doubt they would agree to a merger.