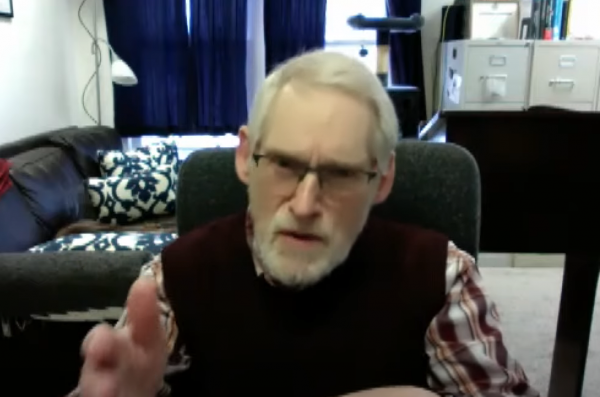 Screenshot from 14 on your side via YouTube
February 7, 2022 By Jack Shepherd

Ferris State University’s very own director for the Study of Academic Racism, Professor Barry Mehler, came out with an absolutely bizarre statement about the Second Amendment and what that amendment gives citizens, white men in particular, a right to do. Professor Mehler was recently suspended from his role as a professor after releasing a series of bizarre videos to his students where among many things he had called them “c**ksuckers” and claimed that the Second Amendment gave white men the right to kill black people.

Professor Mehler’s first video to his students was quite the introduction, in the video, he declares that their grades were already determined as he uses predestination as his grading system and that they could go ahead and complain to the dean as he was retiring at the end of the year. “So if you want to go to complain to your dean, f**k you, go ahead, I’m retiring at the end of this year and I couldn’t give a flying f**k any longer. You people are just vectors of disease to me and I don’t want to be anywhere near you. So keep your f**king distance,” were his exact words to students.

The video showing this video was uploaded to YouTube and it went viral, many finding the professor’s unhinged tirade to be quite amusing. The video going viral is what alerted University staff to the professor and they quickly suspended him as a result. To put it bluntly, professor Mehler did not take the suspension kindly.

In response to his suspension, the professor appeared in an interview on YouTube and defended himself. In this video we see the professor defending his comments stating that they fell under the First Amendment and that he should be allowed to say what he wants to his students, he then went on to rip the Second Amendment as giving white men the right to shoot black men.

“The Second Amendment gives white men the right to carry a gun and shoot Black people when they are afraid. ‘I saw him and I was scared so I shot.’ Stand your ground,” is what Mehler said this time around.

What is truly bizarre about this interview and Mehler’s comments is that he tried to use the First Amendment to defend himself while bashing the Second Amendment, one would think that if one Amendment is invalid they all must be.