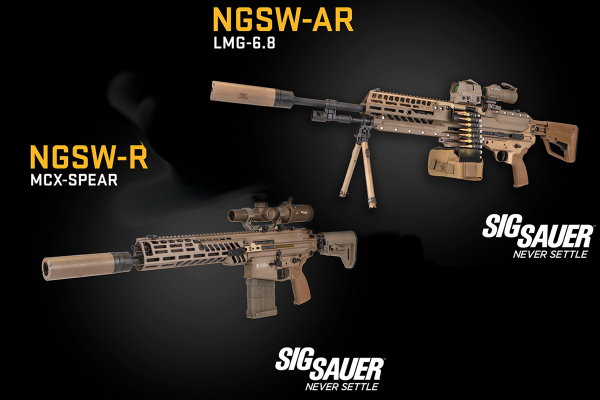 The U.S. Army will decide this summer on its next-generation infantry rifle – its first new all-purpose infantry weapon in decades. Three companies were competing to replace both the venerable M4 (M-16 carbine variant) rifle, and the M249 Squad Automatic Weapon (SAW), with one rifle, reports Defense News (DN).

The three Next Generation Squad Weapon (NGSW) prototypes made by Sig Sauer, Textron Systems, and General Dynamics Ordnance (initially partnered with Lone Star Future Weapons/True Velocity), were tested in September 2021. The next prototype test will be in February 2021.

As to the rifle, DN describes the three prototypes:

Sig Sauer’s [SPEAR] design looks much like a conventional assault rifle while GD [RM277] is using a bullpup design, which shortens the length by building the magazine feed into the weapon stock. Textron has built its weapon around the cartridge, which is unique to them, a cased telescope item that has the projectile inside of the casing to reduce weight.

However with the recent apparent exit of Textron, the Army’s choice now seems to be between SIG Sauer and Lone Star Future Weapons/True Velocity.

Winchester announced that the U.S. Army has awarded the company a total of $20 million in cost-plus and firm-fixed-price contracts related to ammunition development, manufacturing facility requirements analysis and production capacity planning for the 6.8mm NGSW program.

The 6.8mm projectile was chosen after decades of testing and evaluation showed that 5.56mm lethality at mid-ranges on the battlefield was inadequate and existing 7.62mm could be outperformed by the 6.8mm round and save weight for the soldier.

The new caliber also gives the soldier both a rifle and automatic rifle firing the same round, both effective past the 600m mark of existing light calibers.

As the Army Times explains:

The 6.8mm is similar in size to the classic .270 caliber used in hunting and nearly the same dimensions as a popular intermediate caliber favored by the early 20th century Japanese military.

That caliber shows better performance, accuracy, lethality and control than the 5.56mm.

But that’s not all. The Army has also just selected Vortex Optics as the new rifle’s fire control, which should field six months before the weapon to allow the manufacturer time to integrate the new optic with the new rifle. Vortex beat out L3 Harris for the up to $2.7 billion contract for 250,000 XM157 optics over the next decade.

The XM157 has a number of next gen features including a variable magnification optic, a built-in laser rangefinder and atmospheric sensors which feed into an onboard ballistic calculator. It also features a compass and intra-soldier wireless connectivity (presumably alongside the IVAS kit which is in development). It also includes visible and infrared aiming lasers, and a digital display overlay.

Now the only thing that remains is the rifle selection. Once decided, the Army has plans for quick rollout of the new rifles.

Maj. Wyatt Ottmar, NGSW project officer for the Soldier Lethality Cross Functional Team, explained to Defense News that Infantry, Stryker and Armor Brigade Combat Teams will be the first to receive the new rifle. But, DN adds, ultimately “the weapon will be fielded to all close combat forces, including special operations forces, infantry, combat engineers and scouts.”

Meanwhile, even though the Marine Corps is still fielding its brand new 5.56mm M27 infantry automatic rifles to its grunts as their new standard issue weapon, the Corps is already looking at the Army’s NGSW as its own future infantry rifle.

It appears the Marines got a bit ahead of themselves, and now see both the utility of interoperability with the Army, and the enhanced lethality of the new 6.8mm round. If they move forward in partnership with the Army, the Marines could start receiving their own NGSWs by 2025. ADN

I’ve have hunted a lot with a .270 Win. While its great for that use I really don’t see the equivalent being a very controllable round for a burst fire shoulder rifle.

The .270 is not close in lbs felt at the shoulder. The 6.8mm is softer. The 270wsm stronger than both. That being said, in saw, a 6.8 is highly manageable. In a rifle platform it’s great in 3 shot burst and through a bolt action. A good choice overall.

The author did not explain sufficiently that this is NOT a 270 Winchester. The only true similarity is the bullet diameter. The cartridge is much smaller for use in AR platform firearms.

The 6.8 SPC has been around for a few years as I have an upper in that caliber for the AR15 lower. It definitely out performs the wimpy 5.56x45mm.

it is not the SPC it is a new round, also the article doesnt mention that if sig loses the round will be a polymer.

I have always thought the 5.56 to be a little weak and short ranged for a military round and wondered why the military didn’t go with something with a little more punch like the .243 or .270.
Regarding recoil. The AK’s are .30 Cal and do just fine with short bursts.

well one reason is most troops cant hit targets at long ranges and russia switched to similar round to the 5.56.

Studies of engagements during WW II and Korea revealed that most combat engagements were at much shorter distances than WW I. The hit to miss ratio with 30-06 and .308 was higher than the Brass wanted it to be. Studies done subsequently have shown much improved Hit/Miss Ratios, and that combat rarely takes place at distance greater than 300 yards.
It’s ironic that 77gr bullets have better Terminal Performance than 55gr M193 and 62 gr M855. But let us never forget that the US Armory used Gun Powder that didn’t meet the Operating Specs for the 5.56 X 45 simply because thay wanted to get rid of the old 30/06 Powder Stores. Which is why initially the M16 performed poorly in Vietnam.

Umm……will this new “upgraded” weapon have a “woke” caliber magazine that will only be programmed to unload into the chamber and fire against “politically incorrect” enemies?
The United States Armed Forces have to eradicate the “cancel culture” morons that have contaminated our military ranks BEFORE they can move ahead with any attempts at improvements.

The cartridge sounds alot like Sig’s 277 Fury and I thought the 6mm ARC was going to.be the military’s new go to cartridge.

yes the M249 fires a 7.62 jokes aside they are also looking at LMG/7.62 replacement for the 240. google NGSW for more accurate info or find the youtube channel “task and purpose” and find their NGSW video.