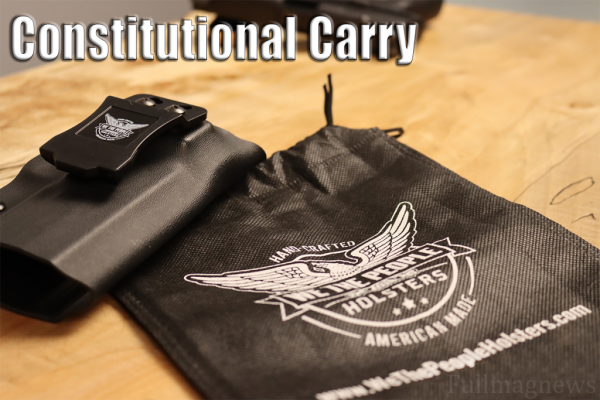 Republicans in the state of Indiana are now aiming to become the next state with Constitutional Carry.

Lawmakers in both the Indiana House and Senate are writing legislation for the upcoming session that are Constitutional Carry related. Last session the Indiana House was able to comfortably pass permitless carry legislation in a 65-31 vote, nothing to scoff at, but the Senate dropped the ball and failed to get the measure to the Governor. Eric Holcomb’s desk.

We expect Eric Holcomb’s desk to be a very surmountable obstacle after legislation gets there, Governor Holcomb is a Republican is a pro-2A unlike other Governors in the country that have killed all permitless carry legislation that crosses their desk.

As reported by WTTV:

INDIANAPOLIS – Indiana Republican lawmakers are working to reintroduce legislation that would allow many Hoosiers to carry handguns without a permit.

Several lawmakers in both the Indiana House and Senate are writing bills.

Known as “constitutional carry” or “permitless carry,” it’s a change to Indiana law some Republican legislators have been working on for years.

“It’s still to me, it’s an infringement of our constitutional rights to mandate, require somebody to jump through hoops, go get fingerprinted, pay a fee – you still have to pay to get your fingerprints done – wait God only knows how long,” said State Rep. Jim Lucas (R-Seymour), one of the lawmakers planning to introduce this type of bill.

The current carry situation in Indiana is not as abysmal as it is in some parts of the country that have also started to move on Constitutional Carry. Indiana is a shall issue state, meaning they have to find a really good reason not to give you a carry permit, but you still have to get that permit and that’s the issue for a lot of folks who interpret the words “shall not be infringed” correctly.

This has been a good year for Constitutional Carry as 5 states have officially passed the measure and several other states have begun the process of passing the measure.

I wouldn’t have predicted this level of interest. Indiana has 29 out of 92 total counties that already have enacted sanctuary laws. But it seems our Biden-led communist movement is waking America up to the need for personal protection. In view of Chicago and Detroit crime rates, perhaps the boogeyman really is coming to Indiana.