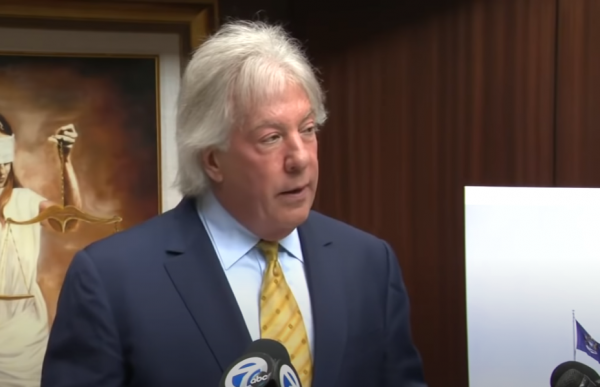 Geoffrey Fieger, the lawyer responsible for filling the two $100 million lawsuits on behalf of the victims of the Oxford High school shooting, hopes that the lawsuits will bring about more gun control laws in the near future.

As reported in WXYZ Detroit:

The suit is filed against school administrators, teachers, and counselors. It alleges the district received complaints about [name of alleged shooter] posts on social media and that teachers and counselors saw his concerning drawings and failed to protect other students.

Attorney Fieger says he hopes the lawsuit results in such a large payout that it motivates a change in gun laws.

The comments from attorney Fieger started about gun control and how legislatures need to do more to stop gun violence, but that is not the full extent of his comments. Fieger would go on in another statement to rail against gun owners and 2A advocated saying “They’re the poster children for the second amendment gun nuts. Who go, Yeah, Give everyone guns!” in reference to the parents of the accused shooter.

The timing of the two major lawsuits from Fieger were seen as offensive by many in the area as the lawsuit was announced while a funeral for one of the victims was still ongoing and the lawsuit is targeting several school officials and teachers who were in the building at the time of the shooting.

Counselor if the current laws were obeyed it might appear that this tragedy would have never taken place. More laws are not the answer. All firearms are nothing more than inanimate objects that lack power to act on their own. The real change needed comes from people.

Sir How true that is. One kick the government out ot the school system and let the states and communities do the controlling. Bring back the board of education 1) Start the day with the Pledge of Allegiance to the Flag of the.                  United State of America
2) Teach the three R’s (reading, writing, arithmetic)
3) Science
4) History (the real history not make believe)
5) Geography
6) Shops (wood and metal)
7) Drafting
8) Home economic
9) Physical Education/Band
10) Drivers education
11) NO electronic in class or on school grounds.
12) Leave politics and personal opinion in the toilet where it belongs.

BS! its all about MONEY!

he needs a hair cut. maybe all that extra hair is putting too much pressure on his brain.

He obviously doesn’t have a brain!

he needs his law license revoked for fake suits

This idiot is the kind of so called lawyer that hangs around outside E.R.s looking for potential slip and fall lawsuits. He builds his wealth on the misery of others. And people wonder why many have little respect for lawyers.

well azzwipe this is why the Founding Fathers warned those Americans back in the 18th Century to beware of barristers. They suggested that the barristers SHOULD NOT be allowed to run for office – now DC looks like a petri dish of c-19 swimming with LLBs ..

Geoffrey Fieger either expects to make huge money from gun control lawsuits, or he is a very stupid man. Gun control laws will not take guns from the criminals, only from the relatively law-abiding people, and this will only make the law-abiding people more easily victimized by the criminals. Police are great, but they only show up in time to clean up the mess. When a person is victimized, the crime is done before police can arrive.

Geoffrey Feiger – another liberal lawyer who thinks MORE gun laws somehow equates to less gun violence. When are people going to realize . . . . . it ain’t the guns?!

The argument of ignorance abounds among lawyers. Professional trained grifters, liars
and fornicators of the truth to play on tragedy to steal money from any and all who they
can lie about with total disregard for truth and justice.

Watch the full length you tube “Innocents Betrayed” to see what has happened to the citizens of various countries when they allowed their governments to restrict their gun rights and then disarm them and that is what will happen to us if our Gun Rights are further restricted or even banned. We have a God Given Right to protect ourselves in any way we choose.

Bravo, Lorraine! The video you mentioned is a good place to start for those that have a misplaced belief in the benevolence of governments. The video proves that governments are the biggest killers of their own citizens.

They never go after criminals but law abiding people who need to protect themselves. We need to demand that the government stop harassing gun owners and go after the real problem which are the criminals.

Just enforce existing gun laws and force judges to mete out more than slaps on the wrist when gun laws are broken.

I’m from MI, Fieger has been doing this crap for years here. He is the lowest of low rent scumbag lawyers. As the article said the community hasn’t even buried the dead and his ugly mug is all over TV boasting about suing the school. Nothing but an old worn out Liberal blow hard

Another highly educated professional who believes lawsuits will force mentally afflicted persons to stop being mentally afflicted. This one believes confiscating guns will stop the violence even though nobody in that school had any! Everyone he plans to sue already agree with him.

The shooter was a deranged child and his parents share the blame but if they had it to do over, they’d doubtlessly do things differently. This lawyer believes a trial and a bag of money will force politicians to make us safe.

Colossal assemblies of people such as those that make up our cities and states always need laws and physical protection from the few souls capable of harming others. Some recognize that organized law enforcement is needed but can never be totally effective. History has proven that self protection is necessary.

The U.S. seems willing to re-learn that truth again and again.

The height of disappointment is a bus full of lawyers going off a cliff and there’s one empty seat.

So what does this ambulance-chasing, shyster propose they do about “f#€k-ed up” parenting…❓