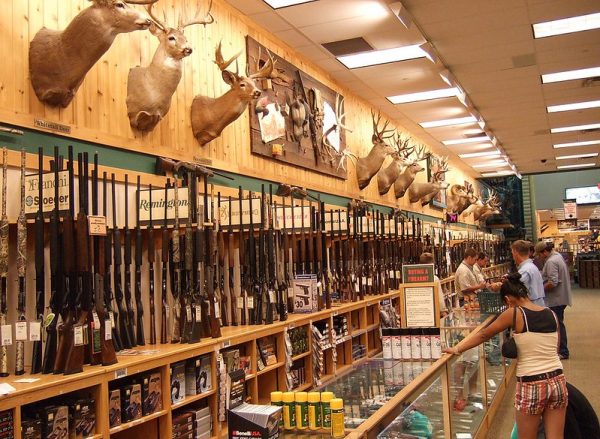 Democrats on Capitol Hill moved on a slew of new gun control regulations that would primarily affect gun dealers, the Federal Firearm Licensee Act. The legislation was introduced by Rep. Robin Kelly as a plan to go after rogue firearm dealers and it is intended to clamp down on gun crime.

Rep. Robin Kelly said in a statement that “one of the best things we can do to stop gun violence is to eliminate gun trafficking.”

The Federal Firearm Licensee Act(H.R. 6225) adds a new level of liability to firearm dealers and will pave the road for more government intervention and oversight when it comes to mom and pop gun stores as well as local chains. The legislation adds new security requirements for gun stores and will set up new standards that gun stores need to adhere to if they wish to keep their licenses or have their licenses renewed.

The National Shooting Sports Foundation has already come out to comment on this new legislation. Mark Oliva, the public affairs director for NSSF,  said in a statement that this was just the legislation that the group had been warning about. “This is an attempt to weaponize the ATF against a lawful and Constitutionally-protected industry,” Oliva said in a statement.

NSSF was quick to point out that all firearm transfers require a background check with the FBI National Instant Background Check System. NSSF public affairs director Mark Oliva would also go on to say “this legislation has little chance of moving but shows the lengths to which anti-gun politicians will go to malign firearm retailers who are already following the law.”

The amount of trafficking going on isn’t caused by “rogue” Gun stores. Over 80% of the arms recovered after a crime are stolen, and came through the Black Market.

Then make that illegal! That will stop it! 🙂

I thought that theft and the black market were already illegal. Gee, maybe I am confused!

Works every time the nitwits try it. Sarc🤣

Holder did not show for his subpoena, and got nothing,,,,,,compared to the Jan 6 Investigation! add Lois Lerner who never showed either!

Not when they don’t Prosecute them. They never go after the heart of the Black Market. At best, they nibble at the low hanging fruit.
There was a case in Texas a couple of years ago, of a Straw Purchaser they caught. They had him for over 100 Straw Purchases in less than a year. Several of the guns had been used in murders. His sentence after being found guilty, 9 months Probation.
That guy should have been sentenced to spend the rest of his life in prison, but some Libtard Judge ignored the mandatory sentence requirements.
Until we start prosecuting these perps to the full penalty under the Law, the crimes will continue to grow.

And the Cartels who have set up shop in the USA, Biden’s USA! Along with thousands of criminals from many country’s

I remember when gun trafficking was ok according to Eric Holder Obama’s Attorney General who sold guns to the Mexican Cartel. But then again when crime involves a Democrat all bets are off.

Patrick – that was so on target it should sting! But alas – nothing will happen to a democrat. But if we could link it to trump ?

The biggest gun store is run by the Cartels! On this side of the Border!! What say you Joe Biden? I know Hunter probably uses the fentanyl, but the guns? how much you and Pelosi pocketing from the sales?

Criminals don’t go to licensed dealers to buy weapons. They go to the underground market for weapons brought across the Southern Border by future Democrat Voters.

If the gun grabbin’ ninnies are so distraught with “all” the illegal guns out there, I wonder why they don’t go after them first. Clearly confiscating a half-billion privately and legally owned firearms would greatly increase the crime rate. But they already know that and what they really want is to disarm their neighbors, friends and relatives, the people with whom they interact.

They’re not interested in the hundred million Americans with criminal records, rap sheets if you will. Gun grabbers live in higher social strata and don’t work with or even see the criminals who prey on unprotected people, many of whom live in the lower strata. Most with rap sheets are older and inactive. More than two million criminals languish in federal, state and local prisons and jails.

If the ninnies really want to curb crime, they should push congress to form joint task forces from federal, state, county and city law enforcement and concentrate on the 63 counties (2 percent of the total) where half of America’s murders occur. Everyone knows precisely where they are because the current administration and a handful of governors and mayors put exclamation points on them.

Tell Rep. Robin Kelly to make a thousand laws and criminals will still have guns, you know, the people that do the killing!! Keep it up Marxist and the guns will sing as you people are FKNG nuts and need to be exterminated!! Back a mad dog in the corner and they will act, just like the democrats army of BLM and Antifa.

Regulations are why I stopped renewing my ffl

More to turn this country into a Communist/Nazi Dictatorship and the people into slaves.
Because it has NOTHING to do with combatting CRIMINAL ACTIVITIES, it is to CONTROL the people.

our corrupt gov’t WILL NOT take our guns, it is IN THE CONSTITUTION…I am so tired of these corrupt, lying, evil, pond sucking scum dems

Obama flooded the black market with fast and furious.

Over 80% of the guns recovered after a crime, are STOLEN Firearms. I seriously doubt there are that many “Rogue FFL Holders” to be statistically significant in the DemoCommies War on Guns.

Time for the gungrabbers to connect the dots and stop defunding law enforcement from locking up those breaking the laws that dems don’t want to enforce. More laws against the law abiding citizens won’t help. Oh I forgot. That wouldn’t be fair.

why do governments drop charges against criminals who are caught with illegal guns ? time and time again i see this. We have plenty of laws already many of which aren’t enforced and yet the anti-gunners want more laws !

The laws they want to pass are to control us. They have no intention, or interest in using laws to stop crime. Crime is the friend of gun grabbers.

Hey ignorant Rep! When guns are outlawed the criminals will still have guns. And that my friend is on you and your liberal Mayors and Governors who ignore crime by letting the criminals repeat, most of the time the next day!!?? I wonder why. Can you explain REP, Robin Kelly