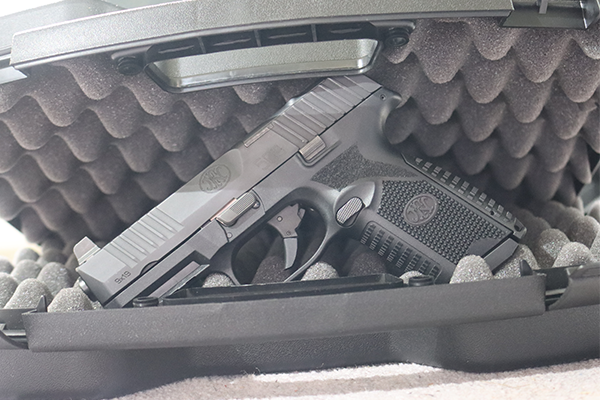 With the holiday travel season upon us, this is a good time to review the rules and procedures for checking a firearm on an airplane.

For those who are careless, or don’t know what they’re doing, it means one thing: Trouble

Federal law allows Americans to check firearms while traveling by plane but requires that passengers declare the firearm(s) during luggage check.

I often check firearms when flying and have found it surprisingly easy.

Before we begin, please remember that it is your responsibility to be aware of the firearm laws of the place that is your destination. Depending on where you’re going, you may not be allowed to conceal carry and/or hunt anyway.

Please note that the rules and processes I’m about to describe only apply to domestic flights. Traveling internationally with a firearm is usually possible but requires a great deal of preplanning and paperwork – even just to Mexico or Canada.

Here is what to expect if you decide to check a firearm on your next domestic flight.

First, you absolutely WILL have to check a bag if you decide to fly with a firearm. Firearms are NOT allowed in carry-on luggage under any circumstances.

I’ve never had to pay an extra “firearm handling fee” when checking a gun. If the airline charges a fee for checking a suitcase, then you’ll just have to pay the baggage fee.

Also, United, American, and Delta limit you to five firearms per case. I’m not sure about the other airlines.

You will need to do the following BEFORE heading to the airport:

After you’ve placed the gun in its hard-shell case, put the case in your suitcase. Don’t bury it too deep because you’ll be asked to remove the case and show them the gun(s) when you get to the airport. NOTE: the suitcase itself doesn’t have to be hard-shell. It can be a duffel bag or another type of soft-sided suitcase.

Once you arrive at the airport, get in the normal line to check a bag. Most airports don’t have a special ticketing counter for those checking firearms and you don’t have the option of using the curbside counter when checking a firearm. When you get to the counter, politely tell the agent behind the counter; “I need to declare a firearm.”

The ticketing agent will then ask for your ID, flight info, etc. He/she will also take out a form and begin filling it out. You might have to fill out part of the form as well.

He/she will then ask you to remove the gun case from the suitcase and open it so they can see inside and visually confirm the guns are secure. I’ve never had an airline worker actually touch a gun before – they basically just look inside and confirm that there is indeed a gun in the case.

You will then be asked to close the case and secure it with a padlock (or the built-in dial lock, depending on the case). You will then be asked to sign a slip of paper that the ticketing agent will tape to the outside of the gun case. The paper is usually bright orange or red. Depending on the specific airline’s protocols, you might receive part of that paper; others will just give you a receipt for having paid to check a bag (again, except Southwest).

You will then place the locked gun case back into your suitcase and close it up.

What happens now will vary with each airport. Some will take the suitcase and place it on the conveyor belt behind the ticketing counter like any other piece of luggage. Other airports will ask you to take it to the luggage scanner nearby. Other airports, including Dulles International (my local airport), will escort you and your suitcase to the luggage scanner and ask you to stand there while they scan it. Once they tell you that everything is good to go, you can proceed to your gate.

Once you arrive at your destination, go straight to baggage claim. At most airports, your bag will simply come out on the carousel-like any piece of luggage. Rifles could be a possible exception to this rule. With rifles, you’ll occasionally be required to visit the room next to the baggage claim and present an ID.

I know all of that seems like a lot to think about but it’s really not that strenuous. As I said, I check firearms all the time and have never encountered any problems. Just follow the guidelines I described above and give yourself an extra 30 minutes at the airport — just in case.

You can make the process even easier and cheaper by flying Southwest (these plugs are on the house, Southwest – though I would certainly accept some free vouchers if you wanted to send me a few ☺)