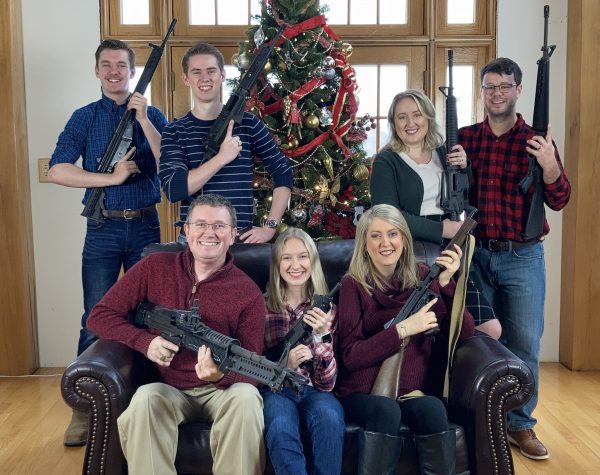 Rep. Thomas Massie and his family / Photo from Rep. Massie on Twitter
December 7, 2021 By Jack Shepherd

Media outlets are attacking Republican Representative Thomas Massie over a photo he posted to Twitter where he and his family are posing with guns.

The photo isn’t anything to get worked up over, the photo shows the representative(who is pro-gun) and his family wielding a variety of firearms. Rep. Masse released the photo on Twitter with the caption “Merry Christmas! 🎄 ps. Santa, please bring ammo. 🎁 ”

US Rep. Thomas Massie is drawing criticism after tweeting a photo of him and his family holding guns in front of a Christmas tree, just days after four teenagers were killed in a school shooting in Michigan.

“Merry Christmas!, ps. Santa, please bring ammo,” read the Saturday tweet by the Republican representative from Kentucky, which showed everyone in the photo holding various types of guns.

The reaction of parents who have lost children in school shootings was swift.
“@RepThomasMassie, since we are sharing family photos, here are mine,” tweeted Fred Guttenberg, whose daughter Jaime was one of 17 people who died in the 2018 shooting at a high school in Parkland, Florida. “One is the last photo that I ever took of Jaime, the other is where she is buried because of the Parkland school shooting.”

Chinese media also put some attention on the photo, negative attention of course.
This is not the first time China has attempted to sow the seeds of decent over the 2nd amendment. China or rather the Communist Chinese Party has tried numerous times in the past to wind up the American people as a means of running cover for its own dubious actions.
Subscribe
Login
25 Comments
Oldest
Newest Most Voted
Inline Feedbacks
View all comments

Does anybody ever proof these reports? It gives a lack of credibility when they can’t use correct English. In this case it should be dissent, not decent.

Steve, I’ve noticed that also in almost all of the sites like this one. I think they must use a spell check or no one cares anymore. Either that, or no one knows how to proof and correct errors anymore. Very disappointing!

Sad, the news media is responsible for all schools shooting. Just kids 15 minutes of look at me on tv. Shame.

All dem’s are the reason crime is high due to their asinine whims & ways of judgement !

Both the fake news media and out corrupt government.

Great family photo. Although my heart goes out to any innocent people and their families who have been harmed or even killed by any means, trying to attribute these tragic events to the lawful ownership of guns by U.S. Citizens is dishonest at best. This would be the same as someone posting pictures of their new Corvette getting chastised because of an unrelated drunk driving fatality in another state. Law abiding citizens have the right to defend themselves from violent criminals and tyrannical governments – just like we had to do in the mid 1770’s. If politicians want to get rid of guns, start by removing them from their federal protective services and private bodyguards.

Looks a lot like my family. Should look like every American family if they want to keep their country from becoming a middle east sh*thole.

Merry Christmas Massies . To the haters get a life. To the families who have lost loved ones my heart felt condolence’s. No one should ever suffer these things. The guns though are not the problem . They are just tools. Prosecute your criminals that commit these heinous crimes. Bring back capital punishment and execute the guilty promptly. No drawn out appeals. Set a new standard to how this behavior will be tolerated. I don’t care if they are 13 years old . If they have the thought process to take a life in the commission of a crime then they are old enough to give up their own life to pay for it. We have become too passive, too soft as a country and it has cost us dearly. We all know what right and wrong is and the difference between the two. We, as parents, are obligated to teach this to our children. As they grow they may stray, but if you done it right they have the foundation they need to make good choices in their lives. I hope and pray every night that our youth today will pick better paths, away from alcohol, drugs and gangs, the things that destroy real growth in a human being. I have seen too many that never grew to their potential in life because of it. May God bless us all. Merry Christmas to all.

A Joyous Merry Christmas to the Massie Clan.
And Best Wishes for a Happy and Fruitful New Year.

I support the whole family. What a great picture .

He’s just asking Santa for what all of us shooters are looking for. AMMO. Since photography was invented and even in the days of tin types people have proudly posed with their favorite firearms. Snowflakes need to get over it. There is an ammo shortage. I have been trying for months to get low recoil in either Fiocchi or Fderal for my Remington Tac 14. No one has had it. Maybe Santa can drop some off at my house.

Socialists & other “fifth-column” operatives, must by definition & purpose, intentionally disarm, the general populace of their guns, and, their constitutionally-protected right to bear them. These lib-turded & left-tarded, demo(n)©rats, are just emulating, what the CCP did in China, after ‘their’ takeover/revolution…history is always cyclical, this is right-out of their communist play-book‼️

Well, at least NONE in this picture have their trigger finger ON the trigger, unlike the leftist’s friend alec baldwin!! And ALL are pointing their firearms in a SAFE direction!

To Hell with the “media” and the Chi Coms. “Shall not be infringed”.

The cnn stench of treasonous media needs eliminating along with all far left news liars !

Gudanya Representative Massie. Reminds me of the Magnificent Seven. I’m sure you hear that a lot.

The china commie biden, bo stench of treason is same as dictator tyranny in NWO !

If that was a photo of a group of people tattooed from from head to toe,gang colors with BLM and ANTIFA regalia the photo would be embraced.

I see nothing wrong with this picture. if anything, I am jealous because he has an M-60 machine gun and she has a Thompson.

WE ARE A COUNTRY OF RIFLEMEN. IF YOU DON’T LIKE THAT….I WILL HELP YOU PACK.

BLAMING ALL CURRENT GUN OWNERS FOR THE ACTIONS OF ONE SICK KID WHOSE PARENTS ARE MORONS TO LET IT HAPPEN. YOU DO NOT TAKE AWAY THE RIGHTS OF THE MAJORITY FOR THE HEINOUS ACT OF ONE SICKO.

Merry Christmas to US Representative Massie and Family.