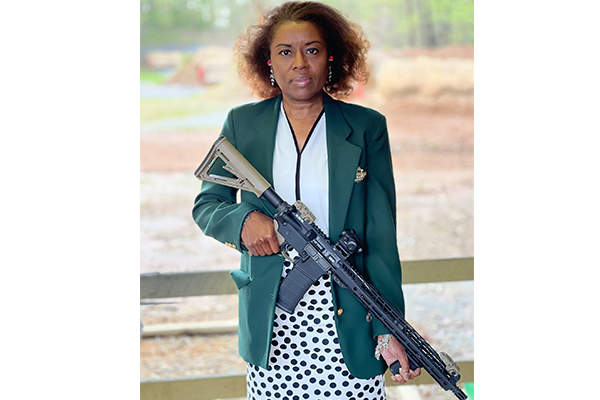 Winsome Sears made history recently as the first Black woman elected to statewide office in Virginia. But the incoming Lt. Governor, who is also a Jamaican immigrant, is likely best known for a campaign photo showing the 57-year-old U.S. Marine veteran posing with a tactical rifle.

As the Press Herald reports:

The image launched the Republican from political obscurity after a nearly 20-year absence from elected office to win the GOP’s nomination for lieutenant governor, and she completed her comeback in November as Republicans swept Virginia’s top offices.

Despite, or maybe because the photo was so effective, many on the Left criticized her for the image. The bashing ranged from the petty to the inane. Most missed the point that she was making it clear where she stood on the 2nd Amendment in a state where ‘Progressive’ Democrats had been aggressively trying to curtail gun rights. But gun rights isn’t her only issue.

Those who know her say Sears is more than a gun-toting caricature – they point to her willingness to buck her own party at times, and her dedication to school choice and other conservative education priorities. The photo grabbed attention, but she held it with an engaging, almost stream-of-consciousness speaking style, firing up the crowds for her ticket mate Glenn Youngkin, now the governor-elect.

Still, the gun issue clearly resonated among Virginia voters, and she stands by her stance. When asked about her pro-gun positionafter the votes were counted, she told a local television station: “Harriet Tubman carried a gun and if it was good for her, then it was good for me too.”

The pro-Trump Sears served as co-chair of a group called Black Americans to Re-elect President Trump and defended him against charges of racism. But that hasn’t kept her from challenging the GOP when it veers of course.

The Press Herald reports that:

In 2018, she launched a write-in campaign for U.S. Senate when Corey Stewart, whose campaign had links to white supremacists and used the Confederate flag as a prop, won the GOP nomination.

Sears is also strongly pro-life, and Democrats are particularly concerned about her strong anti-abortion record. Her opponent repeatedly warned voters that the Senate is essentially split 20-20 on the issue, Sears said voters heard her opponent and that helped her more than double her fundraising, with voters ultimately rejecting the Democrat’s pro-abortion pitch.

When she is sworn in in January, she will be the first woman in the post, which is considered a launching pad for future governors. Five of the past 10 lieutenant governors in Virginia have gone on to serve as governor.

Let’s hope she is one of those in the next election. Congrats to Winsome Sears, a true American. ADN

Paul Crespo is the Managing Editor of American Defense News. A defense and national security expert, he served as a Marine Corps officer and as a military attaché with the Defense Intelligence Agency (DIA) at US embassies worldwide. Paul holds degrees from Georgetown, London, and Cambridge Universities. He is also CEO of SPECTRE Global Risk, a security advisory firm, and President of the Center for American Defense Studies, a national security think tank.

Paul CrespoPaul Crespo is the Managing Editor of American Defense News. A defense and national security expert, he served as...