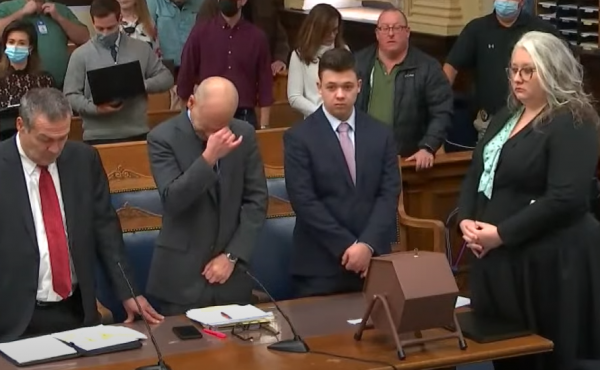 Screenshot via the Law and Crime Network
November 20, 2021 By Paul Crespo

OPINION – After a contentious, highly politicized, and public trial, a jury has found Kyle Rittenhouse who fatally shot two violent attackers and wounded a third during violent BLM riots in Kenosha Wisconsin, not guilty on all charges.

Justice was served with this full acquittal and exoneration.

The trial pitted supporters of Rittenhouse, who at the time, was 17 years old and the 2nd Amendment, including myself, against mostly leftist opponents who decried Rittenhouse a punk, white supremacist, vigilante intent on committing murder.

Black Lives Matter quickly jumped in calling him a racist, even though all three of his attackers were white.

Rittenhouse was jailed for two months in fall 2020 before posting $2 million bail raised after a crowdfunding effort.

Kenosha County Assistant District Attorney Thomas Binger tried to paint Rittenhouse as a reckless teen who took his gun to Kenosha and provoked rioters, including his three attackers. Rittenhouse defense attorney Mark Richards argued that Rittenhouse was a kid trying to help his community during violent riots when he was attacked and his life threatened, forcing him to defend himself.

At one point during a reckless courtroom stunt, Binger broke all gun safety rules (weapon loaded or not) when he pointed an AR-15 style rifle at the jury with his finger on the trigger. This image was contrasted dramatically on social media with photos of Rittenhouse exhibiting proper gun safety protocols while on the street in Kenosha with his finger always off the trigger.

Then-17-year-old Rittenhouse was part of a group of volunteers who were asked to protect Kenosha businesses during protests that escalated into looting and rioting in reaction to the police killing of Jacob Blake. Rittenhouse also offered medical aid to injured protesters and helped clean graffiti from buildings, evidence showed.

During the riots, Rittenhouse fatally shot 36-year-old Joseph Rosenbaum, who was seen on video chasing Rittenhouse and throwing a bag [of something] at him while threatening to kill him. Rittenhouse has maintained that he fired four shots at Rosenbaum after Rosenbaum attempted to grab the barrel of Rittenhouse’s rifle.

Rittenhouse fired one shot that killed 26-year-old Anthony Huber after Huber struck Rittenhouse with a skateboard. He also fired upon Gaige Grosskreutz, who survived with a wound to his arm. Grosskreutz had testified last Monday that Rittenhouse only fired at him when he aimed his handgun at Rittenhouse.

Rittenhouse fired only a limited number of times while prone on the ground while being attacked. The media downplayed or covered up the extensive criminal histories of Rittenhouse’s attackers.

However, Rosenbaum was a convicted child molester and was prohibited from possessing firearms. Rosenbaum initiated the attack on Rittenhouse trying to take Rittenhouse’s rifle.

Huber was a convicted felon and serial domestic abuser who tried to strangle and suffocate his girlfriend.

Grosskreutz has a lengthy arrest history including a conviction for carrying a firearm while intoxicated. He’s affiliated with The People’s Revolution, a leftist Milwaukee-area protest group.

While prosecutors kept trying to argue that Rittenhouse somehow provoked these attackers simply by carrying an AR-15 rifle, the defense made it clear this was a canard since Rittenhouse never pointed his weapon at anyone or fired until he was viciously attacked, and his life was in danger.

As I have repeatedly argued, this is the textbook definition of self-discipline and self-defense.

“Kyle was a 17-year-old kid out there trying to help this community,” Rittenhouse’s defense attorney Mark Richards said. “Kyle was not an active shooter. That is a buzzword the state wants to latch onto.”

“My client didn’t shoot anyone until he was chased and cornered,” Richards said, later arguing that Rittenhouse’s behavior was “protected under the law of the state of Wisconsin.”

Preparing for possible BLM sponsored violent protests in response to the not guilty verdict, Wisconsin Governor Tony Evers authorized the deployment of 500 National Guard troops to Kenosha to support law enforcement ahead of the anticipated verdict.

Thankfully, Kenosha police have tweeted repeatedly this week that no threats to public safety were identified.

Let’s hope that peace prevails now that justice has been served.

THANK GOD THIS KID GOT JUSTICE.. NO THANKS TO OUR IDIOT PRESIDENT, OUR DEMOCRAT RACIST, BLM, BLACK SHIT HEAD PREACHERS WHO PREACH RACISM, & THIS WASN;T EVEN A BLACK NIGER,, WHITE BOY WHO WAS ATTACK BY THE RIOTERS,, OUR STAND DOWN POLICE CAUSED THE WHOLE DEAL.. MANY MORE AMERICANS BLACK & WHITE NEED TO TAKE TO THE STREETS & CLEAN THEM UP. BYE BYE GANG BANGERS BYE BYE DRUG DEALERS (MAJORITY OF THE BLACK & MEXICANS) VERY EASY TO IDENTIFY WHERE AS THE BACKERS ARE WOMEN LIBBERS & BLM & ANTIFA (MIXURE OF BLACK & WHITE DRUGGIES) SO THANK YOU PAUL YOU ARE MY HERO NOT THE WEASEL REPUBLICAN PARTY

This whole thing could have been prevented had police and national guard been there in the beginning. I’m with Mahony all the way as the low life Democrates lose this one and the media i.e,CBS, NBC, ABC, and CNN could not influence. Lets remember Gov is Dem, Judge was Dem, Mayor was Dem, and Rittenhouse is free…Hurray!!! I can’t wait till Next November when the swamp gets wiped out. Our President is an idiot, and Nancy Pelosi needs to move to China so she can screw them up too! Oh, take Romala Kamala too!! What a damn mess!!!!!

Everyone wants someone to blame for this, but the simple fact is this: The Media, and subsequent Political Leaders Lied and Obfuscated about the shooting of Jacob Black. Their Lies started the whole chain of events that followed. They then Lied about the events involving Rittenhouse and the 3 men he shot. They told and fabricated a narrative that wasn’t even close to being the truth, and they are still doing it even now. I hope Kyle sues them all for their vicious and malicious Libel and Slander. But….

Until those responsible for the Lies and Slander are held CRIMINALLY RESPONSIBLE for their actions, this BS will continue. Financially responsible hasn’t changed their malicious behavior, so they need held Criminally Liable. The 1st Amendment was not written to protect this kind of Criminally Irresponsible Free Speech.