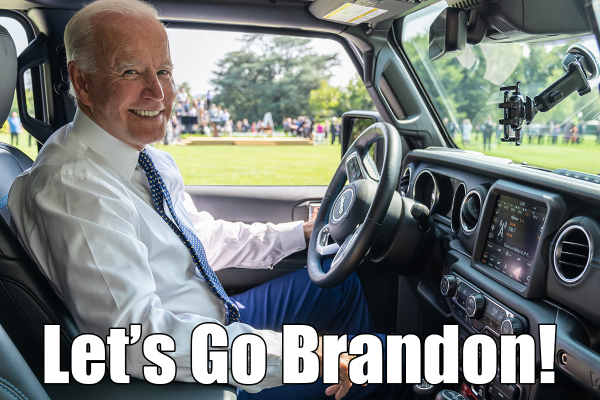 It took a while for the liberals of America to catch on to the “Let’s Go Brandon” meme, so long in fact that companies are already releasing branded AR-15 lowers with the meme on it.

The “Let’s Go Brandon” meme is a reference to when a crowd at a Nascar event chanted “F**k Joe Biden” and a news personality commented saying that they were actually cheering “Let’s Go Brandon.”

This meme has taken off quite a bit and the gun makers are now getting their licks in, trying to profit off of this insanely popular meme. All power to them, this type of thing generally does well and it makes for some interesting conversations at the range!

The company responsible for all this outrage is Palmetto State Armory.

Palmetto began a marketing campaign for its “LETSGO15” Stripped Lower Receiver. The fire selector reads out “[email protected]!” for safe, “JOE!” for Fire, and “BIDEN!” for Full-Auto.

The media has already taken this to the task. They have accused this meme of being too vulgar and are suggesting that this product is suggesting that buyers do more than have fun at the range with it. This won’t lead to anything, this is the standard line of attack from the gun grabbers. “Only crazy people need guns!” that’s their typical excuse anyway.

To be honest, these gun makers are always late to the party when it comes to memes and internet culture. This meme has already come and gone in the eyes of those in the know when it comes to the subject and it’s honestly disappointing to see gun makers catch on so late to the topic, that said it’s truly sad to see just how late the libs are to this trend considering that they own Twitter and the other social media giants.

This AR Lower is a joke, and nothing else. Feel free to pick one up to “own the libs” if you want to. The media has no means of stopping the “Let’s Go Brandon!” chants or the products with that branding, don’t let the stuck-up elitists ruin your fun!

It’s so funny that a LAME stream media TV network “reporter” actually started this by being quiet so EVERYBODY could actually hear the fans chanting “F%¢K joe biden” then saying they were chanting “let’s go Brandon”!! LOLROTFLMFAO!!!!