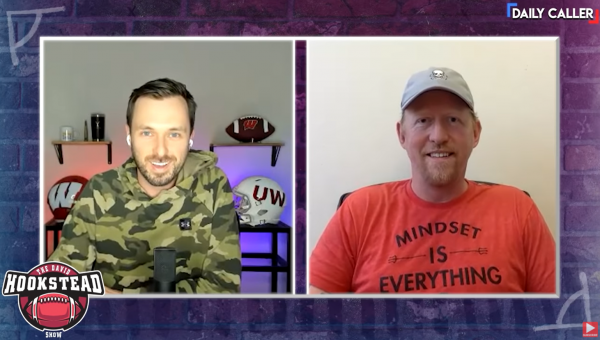 Former SEAL Rob O'Neill appears on the David Hookstead show to discuss a verity of issues including self defense / Screenshot from The Daily Caller via YouTube
October 26, 2021 By Full Mag Staff

Robert O’Neill, the member of SEAL Team Six that killed Osama Bin Laden, was interviewed by David Hookstead of The Daily Caller and in the interview O’Neill revealed his pick for the perfect home defense gun.

During the hour-long interview, which you can check out here, Hookstead asked Robert O’Neil what gun he uses for home defense. The answer that O’Neill replied with is iconic.

“I would probably keep it to a shotgun of some sort. A pump-action shotgun. Probably a Mossberg…because I’m convinced the next person I kill will be in my own house. I’m not going to look for it. I’ve done it,” said O’Neill.

O’Neill would then add “If you’re good with a shotgun, you can get six rounds off in about two seconds and that’s all you need in a house.“

Hooksteads interview goes in-depth on a variety of other topics including what it was like to train on SEAL Team Six.

What’s training like for the mission to kill Osama Bin Laden?

I asked Rob O’Neill – the man who shot Bin Laden in the head – how he found out he was on the raid team and the training that went into it.

He gave one hell of an awesome answer. pic.twitter.com/vptGSBlB62