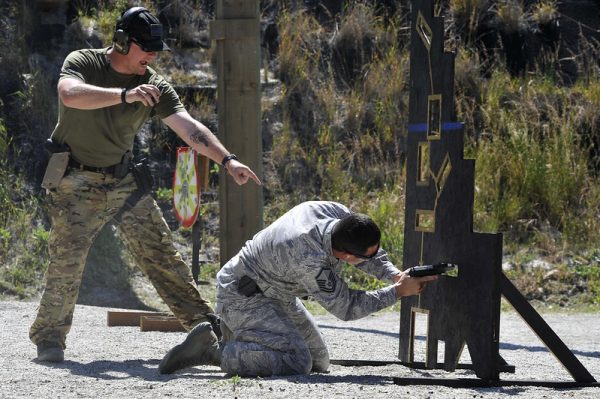 Staff Sgt. Daniel Kane directs a competitor during a law enforcement pistol shoot event at Vandenberg Air Force Base, Calif., May 13, 2014. Kane is a range safety officer with the 30th Security Forces Squadron. The pistol shoot was open to all military and local law enforcement officers as part of a National Police Week celebration at Vandenberg AFB. (U.S. Air Force photo by Michael Peterson/Released)
October 26, 2021 By Full Mag Staff

The Washington Post is praising a new policy in the LaGrange, Georgia Police Department that is forcing officers to “shoot to incapacitate” rather than aim for the center of mass when in an engagement.

This “shoot to incapacitate” policy was brought forward by LaGrange Police Department Chief Louis Dekmar. Academic immediately hailed the policy prior to it actually having any data to support it, these academics claim that the move alone merits further research. Other police departments in the area are calling this a disaster before it starts, these police leaders are calling in experts for a major conference and one director is promising to release a paper advising other departments to NOT follow Dekmar’s lead.

The idea behind “shoot to incapacitate” has been around for a while and many people(notable people who have never shot a gun in their lives, let alone get into a shootout) have been calling for this to become the new normal nationwide when it comes to the police. The idea recently took on new support when the police shot and killed 16-year-old Ma’Khia Bryant after she lunged at another teen with a knife during a police standoff.

“Shoot to incapacitate” sure does sound nice, but so does everything originating in the land of make-believe. On the silver screen, we get to see the hero detective shoot the bad guy in the leg before booking him for whatever crime he may have committed. The issue is just that, this idea is a product of the silver screen.

It is almost impossible to think and react fast enough and be accurate enough to shoot to incapacitate someone. When your life is on the line and you only have fractions of seconds to decide what to do the training kicks in and that center mass shot is really the only way to go. In police shootouts the bad guy only tends to stop shooting when they are no longer breathing, sometimes those center mass shots aren’t even enough when a suspect is amped up on drugs like PCP.

Sadly, even if police were retrained to “shoot to incapacitate” they likely wouldn’t be able to do so. The center of mass shot is easy, a round through the shoulder or leg isn’t. This also fails to account for the fact that shooting someone in the leg or upper arms is extremely dangerous. The amount of arteries and veins in these areas of the body is something else, while a shot to the chest might destroy someone’s lung a shot through the thigh might tear open the femoral artery, opening this artery is almost a guaranteed death as anyone with this injury would bleed out in minutes.

The realities of Hollywood just can’t be obtained in real life. This policy will likely end in the deaths of several officers and when this new training doesn’t slow down the rate of officer-involved shootings that result in fatalities the same people praising this policy will be attacking it.

Even dead people often don’t know they’ve been shot. Someone with a fatal wound to the heart can still fully function for up to a minute before succumbing to it. Shooting to incapacitate is going to leave a lot of innocent people hurt or dead. The idea is shoot to stop the threat so the person who is the threat can’t hurt anyone else. If someone’s behavior pushes police to deciding to the level where deadly force is warranted, the person has earned a trip to the morgue.

What idiotic moron came up with this BS??!!! This will get a lot of officers killed & injured, for as you stated a bunch of perpetrators don’t even register that the have received a wound. Observed it, more than once. What are these “academics” basing this on & NO Top LEO worth his/her salt would endorse this suicidal idea!!!!

Sounds like a Democrat – shoot ’em in the leg so they can file a lawsuit against you in a Liberal court jurisdiction, for simply protecting yourself or a loved one.

Strange I’m not ALLOWED to give this comment an UP vote!! So add one more up vote to the total votes.

That’s a formula for getting Police officers hurt or worse. It is also likely to cause injury to innocent bystanders.,as the reason CENTER MASS is prescribed is because it is the largest target, and most likely to incapacitate a hostile individual….If a Police officer, or for that matter any legitimately armed Citizen chooses to use lethal force as a last alternative, then seriously ANY shot can be lethal….the idea of shooting a gun or a knife out of an assailants hands is fantasy. Most likely it would result in a miss, which means the BULLET is going someplace other than the intended place……where?….who knows……so the wise choice, if and only if, firing the gun is the last choice, is shoot center mass and keep shooting until the threat is eliminated.

So you shoot the perp in the head. That would pretty much incapacitate them.

Prosecutor: Why did you shoot the deceased in the head Officer?

Officer: Well sir, following Training Protocol of “Shoot to Incapacitate,” I attempted to use my weapon to crease the decease’s skull with a bullet, as per my extensive training to render the deceased unconscious.

Prosecutor: Officer, that doesn’t explain why you shot the victim in the head, missing your target by inches. Can you explain to the Jury why you missed?

Officer: Yes Sir, the F***er moved and spoiled my aim.

This alone shows the ignorance of the guy whose idea it was and the media backing it!! Nothing further needs to be said

I’d just add some observations. First, very few are such experts. Secondly, I’d bet that most shots, even from experts, either miss the center mass or miss the bad guy altogether. Thirdly, it would be an objective that’s much more difficult because they face unpredictable and moving targets in the real world. And fourthly, it would even the odds between criminals and law enforcement. Why would any sane person want to even these odds?!!! Sounds like another “equity” scam to me.

“’Shoot to incapacitate” sure does sound nice, but so does everything originating in the land of make-believe. On the silver screen, we get to see the hero detective shoot the bad guy in the leg before booking him for whatever crime he may have committed.”

The gun grabbers that said that allowing LAW ABIDING CITIZENS to conceal carry with a $$$ GUBBERMINT ISSUED (unconstitutional, shall not be infringed) PERMIT, would return us to “THE WILD WILD WEST” is also a figment of HOLLYWEIRD movies and TV westerns. The wild wild west and blood running down the streets only happen in blue run states and cities that allow CRIMINALS to riot, loot and burn down their cities.

Then they don’t bother to ARREST and convict those criminals or if they do, they raise funds (kamala harryass) to BAIL THEM OUT OF JAIL!! Then wonder why the crime rate climbs through the roof! DUHHHHHHHHHHHHH!!

When you ARREST, convict then CONFINE them to prisons, the crime rate DOES drop!

Has this fine CHEIF ever been in a life or death situation where one or more of his citizens whom he is sworn to protect or he, himself been in imminent dander of death? I’ll bet not! The ONLY GOAL of deadly force is to TOTALLY stop the hostile act/s!!! One of these Hollywood trick shots would have little or no effect.