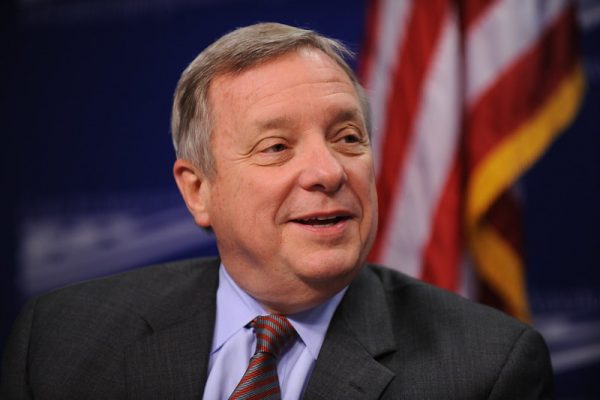 Public Campaign for a discussion with Assistant Senate Majority Leader Dick Durbin (D-Ill.) and House Democratic Caucus Chairman John Larson (D-Conn.) as they discuss why they sponsored the Fair Elections Now Act, and what they see as the road ahead in wake of the Citizens United decision. / Photo by the Center for American Progress via Flickr
October 25, 2021 By Full Mag Staff

Democrats in the Senate have introduced a new bill that required all new FFLs to submit a security plan to the federal government as part of the application process. Current FFLs would be required to abide by new restrictions as well.

The SECURE Firearm Storage Act of S. 2908 was introduced by Senator Dick Durbin and will mandate certain security measures at gun shops to allegedly prevent thefts. S. 2908 will allow the US Attorney General to institute a new set of regulations for gun stores across the country and those stores found to break these new regulations will be subject to major civil penalties and the suspension and revocation of their licenses.

Every gun grabber in America came out of the woodwork to support this piece of legislation. S. 2908 is currently being co-sponsored by seven Democrats in the Senate and a companion piece of legislation has been introduced in the House. The gun control lobby has come out to endorse this bill, groups like the Center for American Progress, Everytown, and the Giffords group have all come out to mark this bill with their seal of approval.

Mark Oliva, the public affairs director for the National Shooting Sports Foundation told Guns.com in a statement “Senator Durbin and Congressman Schneider propose to create mandatory federal firearm storage requirements for firearm retailers not so they can improve security in communities but to mandate unaffordable incurred costs that will drive these owners out of business.”

And with this we x=can see the point of why liberals are on board with this legislation. If the legislation cannot be put in place to take our guns, just change the laws surrounding the laws which will increase prices to drive gun ownership down and out. It’s the same thing with everything biden and his cronies are doing. But don’t worry, if the 2022 elections have any feel of theft by the left. I’m happy that I do not identify demo. They will feel the pressure from Patriots for sure.

Any requirements beyond barred windows, steel doors and electronic notification are infringements and worth a look by the Supreme Court. Durbin’s democrats are ridiculous.

AMAZING… Phuckolitians still don’t get it. Arrest the criminals, not the law abiding, tax paying citizens.