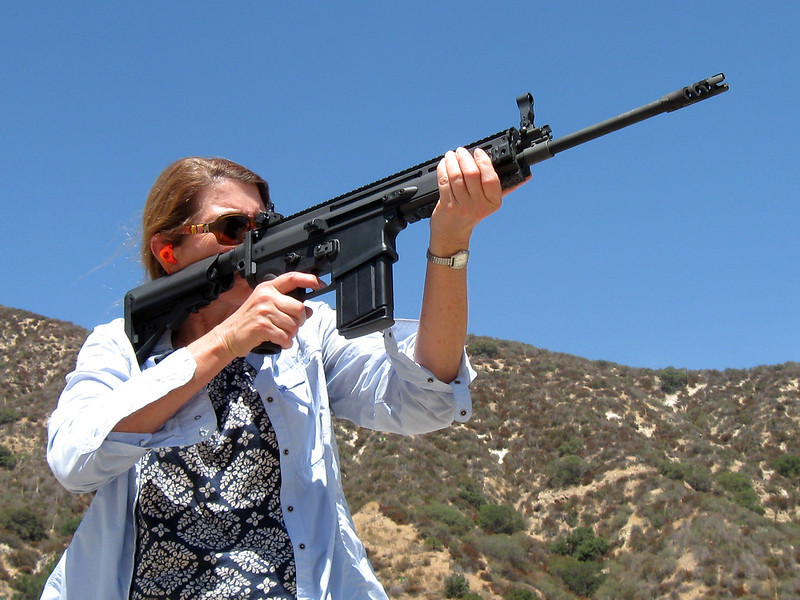 Photo by Mitch Barrie via Flickr
October 19, 2021 By Grace Boatright

Last month, we learned the results of the 2021 National Firearms Survey which revealed that nearly half of new firearm purchases in the last year were made by women.

As the only female firearms instructor at one of the ranges closest to our nation’s capital, I wasn’t shocked at all. At least half of my new students in the last year were women – a huge increase compared to prior years.

I’m no sociologist but can confidently say this increase in female gun ownership is closely tied to the chaos induced by COVID, the subsequent rise in crime, particularly violent crime, and the public’s growing lack of faith in the government to protect them.

Women in particular are more concerned about this rise in crime because we will always disproportionally feel the impact.

At their core, criminals are lazy – even the smart ones. If they weren’t lazy, they would earn money by honest means like the rest of us. Simply put, women are easier targets for criminals and thus are more likely to be victimized.

What this study also indicates is that more women are buying guns for themselves and by themselves. Why? Because when compared to previous decades, more of us are single, living alone and must rely on ourselves for protection and security.

That’s not a negative thing – it’s just a contemporary fact of life.

The following are just a few of the many horror stories I’ve been told by my female students in the past 18 months.

Those are just some of the more colorful stories. Sadly, I can’t even count how many female students have confided in me that they were buying a gun and seeking training because their ex-husband or boyfriend was getting violent and she was fearful for her safety and/or the safety of her children.

As a matter of fact, that’s by far the most common reason, and it’s prevalent in every neighborhood, town and city across America.

The bottom line is that the National Firearms Survey brought into the open what has been obvious for years: the world in which we live is increasingly violent and unhinged and we are increasingly living a “peephole existence” behind fortified, locked doors.

Women, consequently, have had no choice but to take it upon themselves to ensure their safety and the safety of their children – and a gun is the best, quickest, and safest way to accomplish that.

What does anybody expect? The demoRATS want to defund the police and coddle the lowlife criminals, antipanties and Buncha LYING Marxists. They now realize that they are going to have to be their own defense because no one else will. Buy something that will stop them DEAD on their tracks and go to the range to become very proficient with it.

The Local Municipal Range I’m a member of and RSO. Our bi-weekly Free Gun Safety classes have seen an marked increase in female participants. This suggests that we’re seeing more women purchasing their first gun and seeking training. At a rough guess I would say it’s about 50 over 2019. We were shut down for most of 2020, so we only had a few classes in January and February