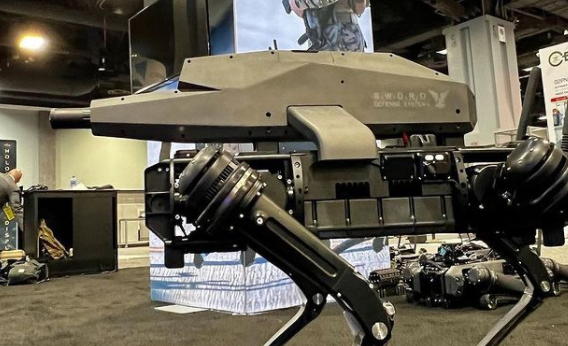 The film Terminator pits machine against man in a world ending conflict where all that we know is lost and machines rule the Earth, seems a bit far fetched don’t ya think? Maybe not…

Quadrupedal robots, commonly referred to as robot dogs, are a modern marvel. These machines can traverse terrain that most vehicles can’t and their potential is near infinite, considering that it was only a matter of time before one of these things was turned into a weapon.

The above social media post from SWORD International is not a fake, not only is that real… It is functional.

The quadrupedal robot seen above is a Vision 60 Unit produced by the US robotics firm Ghost Robotics. The gun mounted on top was a custom built by small arms specialist SWORD International. The gun is called the SPUR or Special Purpose Unmanned Rifle. This rifle does need a person to use, probably why “unmanned” is in the name, and has a thermal camera with 30x zoom for targeting in dark areas or at night. The effective range of SPUR is 1,200 meters.

Considering recent advancements in artificial intelligence, this robot could have some serious potential on the battlefield. It is unclear if this unit is currently being sold to militaries but marketing copy already exists for it.

More on the robot from The Verge:

The machine was shown off for the first time at the Association of the United States Army’s 2021 annual conference earlier this week. The conferences bills itself as a “landpower exposition and professional development forum” held in Washington DC, October 11-13.

Details about the partnership between Ghost and Sword are unclear, but Ghost’s quadrupedal robots are already being tested by the US military. Last year, the 325th Security Forces Squadron at Tyndall Air Force Base in Florida became the first unit in the Department of Defense to use quadrupedal robots in regular operations. It uses them to patrol the base’s perimeter, navigating swampy areas that “aren’t desirable for human beings and vehicles,” according to an interview with Ghost Robotics CEO Jiren Parikh.

Great Target for those .50 Cal/.338 Lapua owners amongst us.

And what enemy will these be used on? The American Population.

Wonderful, just what the world needs.

How about the AI mini drones that can kill? Swarm bots? This “dog” is an easy one to destroy with a 50 cal, but those slaughterbots…that’s another story. Do a story on them.
https://www.youtube.com/watch?v=9CO6M2HsoIA

Baloney. It’s a very expensive and easily defeatable toy. A 50cal broadside to this machine will put it on it’s side on the ground if it doesn’t blow it in half. There may be some limited applications for the Dog Robot, it is a marvel, no doubt, It would take a literal Army of these to pose much of a threat, and then only against a lightly armed opponent.