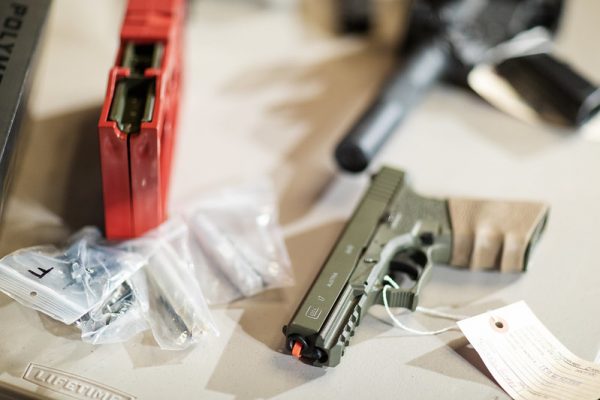 Firearms are pictured during a press conference, outlining a new legal opinion from the Attorney General’s Office addressing the classification of “80% receivers,” which are most commonly used to make unserialized “ghost guns, inside the Governor's Reception Room at the State Capitol building on Monday, December 16, 2019. / Photo by Governor Tom Wolf via (https://creativecommons.org/licenses/by/2.0/) Flickr
September 22, 2021 By Full Mag Staff

Springfield, Massachusetts held a gun buyback event and it failed in epic fashion. The buyback picked up a hefty load of 38 firearms, this is sure to put a serious dent in the number of firearms held by private citizens in the United States.

The Springfield buyback event worked like many other events, $50 gift cards were offered in exchange for firearms. Other cities put up tablets and smartphones but the city of Springfield was not looking to spend too much on this event.

The city of Springfield is home to over 150,000 people and the city was only able to get 38 guns, this is a failure by any and all metrics. The event did not draw in as many firearms as city officials hoped for and those foolish enough to hand over their firearms were not adequately compensated for the firearms they did turn in.

$50? Really? This is nothing, any gun store will pay double that for most .22s and multiple times more for handguns and other rifles. $50 gift cards are laughable and only a complete moron or criminal dumping a murder weapon would favor this exchange.

Buyback events generally don’t go over well, most people are smart enough to take them to a gun store if they want money. If you do have a firearm that a gun store won’t take then it is likely that the only person that could be hurt with it is the one wielding it. These events only collect junk and are often bombarded by con-artists looking to sell garage-made pipe guns.

These events are rife with fraud and these offers are insulting!

👀 These ‘geniuses’ should put Eric Holder in-charge, apparently, he has experience “arming” narco-terrorists across the border. Just like Joe and his “carnival of clowns”-adminstration, has experience arming the Talaban…