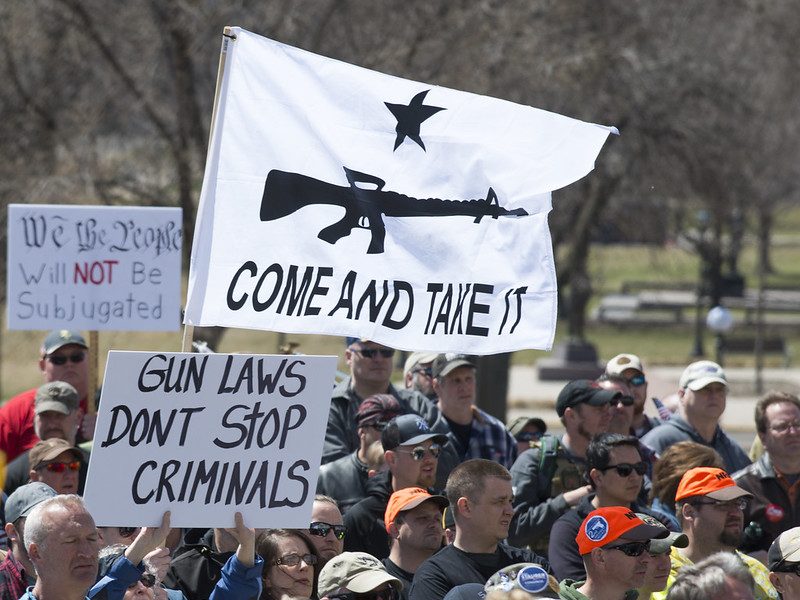 The University of Texas-San Antonio (UTSA) has dropped the tagline “Come and take it” from its sports team branding and banned the term from school events.

The school justified the ban by claiming the term has ties to supremacist groups and is anti-Mexican. University professor Ellen Clark stated in her petition to cancel the slogan that it “embodies both anti-Mexican and pro-slavery sentiment,” and continued saying that it “has carried those white supremacist beliefs from 1835 to today, and in that time has also been widely adopted by anti-government, pro-gun extremists, such as at the January 6th insurrection at the US Capital.”

The phrase “Come and take it” has a rich and deep history; it is odd to see a Texas school abandon it. The term can be traced as far back as 480 BC during the battle of Thermopylae in which Greek Spartans defended their country from the Persians. The term was popularized in America during the battle of Gonzales in Texas (1835) where citizens of the town defended it from the Mexican army.

The term has recently become associated with the 2A community and American gun owners, many supporters of the 2nd Amendment will use the term towards the government. That being said the term has been subject to all sorts of parody efforts and has even been used by other political movements in the country. There was no greater example of this than the pro-abortion movement using the tagline in Texas.

The University President bent over backwards to this one professor and a small group of students, this is all it takes for the gun grabbers to make changes. Be very aware of this fact as more serious battles come up in the 2A world.

I used to believe that college presidents, professors and teachers were some of the wisest, most intelligent people in the nation but over the past thirty years or so I have come to see that the opposite is true. It is now apparent that you do not have to be intelligent to be be a professor or administrator of one of these once great institutions. You just need to be “pc” and “woke”, (whatever that means). God help us.

I’m surprised the writer of this article didn’t mention “molon labe” as the phrase used by Spartans who refused to surrender to a king. In a way, it symbolizes the freedom from King George III who demanded the colonies disarm themselves.

It was recently popularized in New York against the intolerance of Governor Cuomo by passage of the SAFE (Secure Ammunition and Firearm Enforcement) Act. Last I heard, owners of forbidden arms who refused to comply now rests at about 80 percent. It’s now repeated by freedom lovers all over the world.

I will first ask you why did the government choose to remove only two (voting and gun possession) of the citizen’s rights for what they have termed a felony? Think about that for a moment…both of those rights are the only ones that can change their status in the political position they hold. The Supreme Court has already ruled that an ex-felon may own a gun but the law does not question that part. The law says you cannot posses a gun. How can you remove part of a right? The second says a citizen has a right to bear arms. How can you bear arms without possessing? So, where are we now? If you accept that the government can pass a law and you conform to that law you have given them a statement that they have the right to keep on passing more laws restricting our freedoms.

News to me – anti -Mexican ? & pro slavery? I’ve actually heard a hispanic (not mexican) say come and take it – only he was holding a blade. No puffed up chest waving a flag.
“Sticks & Stones may brake my bones – But Woke professors are such Wussies <- rhymes with.

they CANNOT ban it, this is called the 1st Amendment, FREEDOM OF SPEECH…F these people