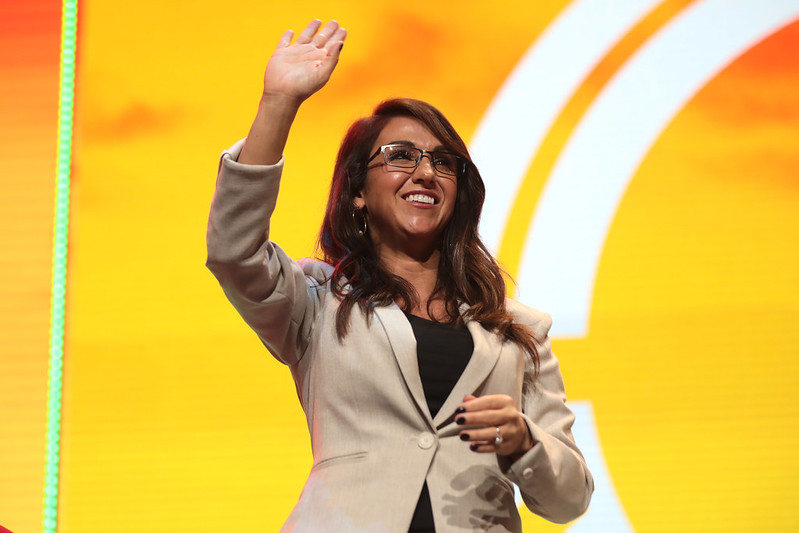 Salon.com and other media outlets are once again going after Republican representative Lauren Boebert, this time they are trying to condemn her as a bad mother and unsafe gun owner by cyberstalking her 8-year-old online.

Salon reporter Zachary Petrizzo decided to go through Lauren Boebert’s son’s TikTok account to find evidence of any wrongdoing. Petrizzo found a video where firearms can be seen in the background of their family home, because of this he argues that Boebert is violating Colorado’s gun storage law and endangering her child.

In the July 25 video, Boebert’s son is seen dancing alone in that same bedroom, close to a weapon that appears to be one of the same rifles seen loaded during the February Zoom call. It’s in a different position in the July video, leaning casually against the headboard of a bed, near what appears to be a handgun lying on the floor.

Boebert did not return Salon’s request for comment on this story.

That high-powered rifle is still visible in a video posted by Boebert’s son in late August, in which he shows off his abdominal muscles. Several TikTok videos viewed by Salon reveal that Boebert’s son was playing in the bedroom, at times with two young friends, but with no parental supervision.

In these videos Boebert’s 8-year-old child does not acknowledge the guns or even attempt to handle them. This is not the point Salon’s Zachary Petrizzo is making, Petrizzo’s angle is that Boebert is endangering her children simply because she has firearms in the home and not in a safe.

This hit piece will not go anywhere, Boebert will not be charged as a result of this article. What is interesting is that people like Zachary Petrizzo are trying to get Boebert fired by cyberstalking their children. This is nothing new and it will only become a more common tactic as time marches on.

Or at least cyberstalk the MSM back

Hey petrizzo, you are just another IDIOT calling attention away from ALL of DICTATOR bid ens BS!!! You scratch and claw at shit, trying to find SOMETHING that will hurt REPUBLICANS!!! Your an IDIOT AND NO ONE I KNOW LISTENS TO ANYTHING YOU HAVE TO SAY!!! You are a loser and I can only hope nobody will pay attention to you!!!

This cyberstalking is an invasion of privacy and a form of stalking and if not an actual crime at this time local and state laws should be passed to make it a crime. Then perpetrators should be held accountable.
I also think citizens should educate themselves on the dangers of social media sites like Tik-Tok and others and refrain from using them.

Perpetrators are not held accountable now unless they are Conservatives. This is just one more drop in the ocean of bad things the internet brought us.
Nobody in their right mind should be on TikTok though. Her letting her son do THAT is much more concerning to me given the high likelihood that the boy has “marching orders” regarding firearms.

He is probably a pedophile using this as an excuse!!!

I bet “Piece of trashzzio” doesn’t even know how to use a gun.

Zachary needs to be arrested for invasion of privacy!

It’s in the public realm thanks to parents allowing their children to access TikTok. That’s the real crime.

Seems to me that Mr Petrizzo should be locked up for being a peeping tom. I have difficulty with personalities that think they are something they are not. This guy is a fool.

If you upload a video of yourself and somebody watches it, that most certainly is NOT peeping or spying, whatever. Regardless, Petrizzo is scummy for cyber-stalking Boebert’s child for political dirt or anything else.

There is nothing too low for the left.

my guess is he is a pedo. why else put that much interest in someone else’s on line activity? get the authorities involved to check this creep out.

When I was in grade school back in the ’40s, my father and all the other fathers I knew openly racked their rifles and kept their handguns in well known places, e.g., drawers, shelves, etc. When I had children, I locked my small collection in a glass display case with a lower and separately locked ammunition compartment. They remain there to this day and except for my immediate family they’re never interesting enough to talk about.

Over the years, no child, visitor, plumber or anyone else ever mentioned them. So, for the past approximately 70 years, firearms weren’t sufficiently interesting for conversation. Now that the leftists are woke with the need to control, they poke, prod, snoop, record and blab about the horrible risk that dangerous people like me have created. Fortunately, leftists don’t visit because, we don’t know any. I keep a small Hellcat on a bedside table.

MSG Leo: you answered your own question using the word pedophiles.

Maybe you could charge him for trespassing.

And who is Salon.com and media to get so busy in people’s own bios ones and their lives! Go back to what you guys do best……..NOTHING!! Oh FAKE NEWS! Haha

An adult spying on an 8 year old child sounds like a pedophile stalker and should be sued for this alleged criminal behavior.

My brother & sister & I , and later my son, grew up with Grandpa’s 2x 12ga and a 22 rifle behind a closet door with shells on the self. Can’t remember how young we were when we 1st shot the 22. Definitely grade school. Strict rules on use and a leather belt hanging in Dad’s closet if you violated those rules. But my bother & I were spot lighting rats in the feed lot at night by Jr. High school age. If there were neighbors or school teachers that didn’t understand firearms use, they kept their nose out of our business. Never heard a Anti gun word through out School, Sunday schools or Church. Never on the news – all 3 channels !
And not uncommon to see gun racks in a pick up in the high school parking lot during Hunting season. >>> Nowadays, a kid can’t even make a finger gun at school without getting expelled. How far we’ve sank into the pool of wussyness

You tell ’em O’Sarge! We must be about the same age, because it was the same for me. I learned how to identify simple terms for guns at a young age because I saw them at my Grandpa’s house. I saw them in the truck’s back windows in high school during hunting season. During bow season, it was hunting bows.
It isn’t the gun that is the problem. However, it seems the only thing humans are smart enough to figure out is how to take them away thus increasing the fear & mystique around weapons. W/that, they just entice rebellious individuals to take guns & use them inappropriately.
It isn’t the law-abiding citizens owning & using guns people have to worry about. It’s those who spy on a child through the Internet. THAT should be prosecuted to the full extent of the law! I hope Boebert has pursued this peeping tom.

Isn’t Zachary on a wanted poster yet?

“Salon reporter Zachary Petrizzo decided to go through Lauren Boebert’s son’s TikTok account to find evidence of any wrongdoing. Petrizzo found a video where firearms can be seen in the background of their family home, because of this he argues that Boebert is violating Colorado’s gun storage law and endangering her child.”

So, this slimeball hacks the son’s TikTok account in order to spy on him and his family and obtain anything that might hurt Lauren Boebert. I’d like to have about ten minutes alone with this P.O.S. and I’ll teach him what he needed to have learned a long time ago. As for this miserable P.O.S., he’s a part of the low life rat infested sewer that the Pelosi’s come from and the Schumer’s come from and…………….this idiot has no idea who and what he’s messing with.

Plus, what the hell is this creep doing in the kid’s bedroom spying? I’d say he a pedophile.

Shouldn’t ol” Zack be arrested for peeping on a kid.

Stalking a child? Sounds like he could be prosecuted as a child pornographer.
No one should allow tick tock into their home either. Another form of Chinese spyware.

Ms. Lauren does but need say the word, and thousands of gun owning Coloradoans will provide her and her family with 24/7 Armed Security Service free of charge. She’s our Rep, and we’ll fight like hell to protect and defend her.

Maybe Solon will wake up WTSHTF and them?

If Ms. Boebert had commented, this hack masquerading as a reporter would have simply twisted her words to fit his false narrative. Funny how he tries to make it sound like the gun is loaded by conflating two different events into one. As a retired law enforcement officer, I had guns in the house. I didn’t hide them from my kids nor did they stay locked in a safe whenever the kids were around; instead, I taught the kids firearm safety from an early age and son-of-a-gun, they never played tried to play with them. I took them shooting regularly so there was nothing mysterious about the guns we had and when they were old enough, I started getting them their own guns. They’re adults now and one has kids of his own and my son and I are teaching his kids about firearm safety.