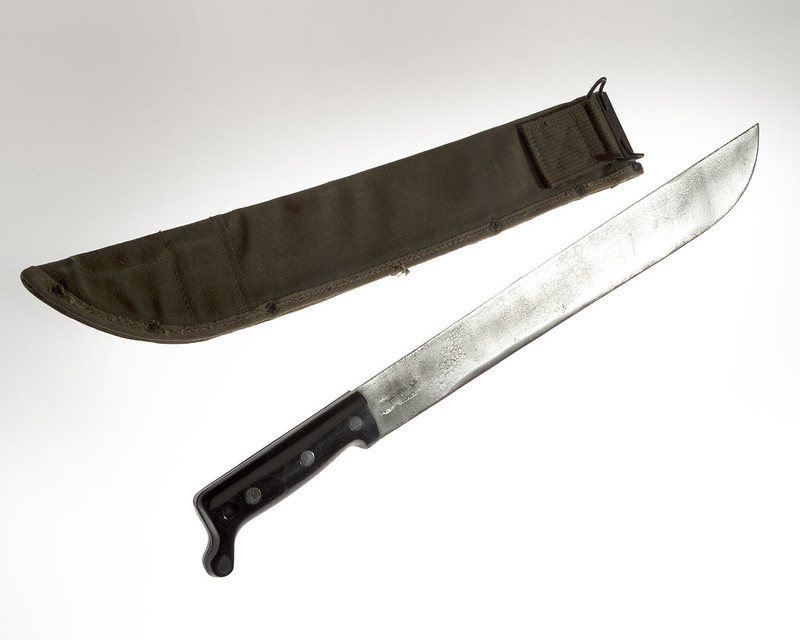 A homeowner in Texas fended off a burglar who was attempting to break into his home with not a gun, but with a machete.

A homeowner in El Paso, Texas woke up to the sound of glass breaking and ran right into 22-year-old Carlos Esteban Villaescusa who was smashing his windows with a large metal rod. The homeowner first attempted to negotiate with Villaescusa, asking him politely to leave. After negotiations failed with the burglar the homeowner went back into his home and would then come back with a machete.

The two battled it out, the homeowner coming out on top. When the police arrived Villaescusa attempted to flee, the nitwit thief was unable to evade the police for long and got caught just a few houses down.

The police found in the morning that Villaescusa had tried to break into a different house earlier in the night. After being taken to the hospital to patch his relatively minor wounds, Villaescusa was charged with a whole list of crimes; burglary, evading arrest, criminal mischief, and criminal trespassing.

While not firearms was involved in this self-defense case there are some takeaways for the 2A community. As we mentioned in a piece earlier this week, a story about Australians trying to ban bows and arrows, the gun-grabbers will not simply go away if they are successful in taking away our guns. These people will move on to archery equipment and blades next. It is not about safety, this homeowner managed to keep himself safe with a machete, it is about disarming the people and always has been.

I fully agree the leftist arguments about disarmament creating a safe society is deceptive and false propaganda designed to control us citizens. They will not stop with guns but will advocate confiscation of all forms of weapons. These severe policies and legislation have already been enacted in the UK, Australia, and I believe somewhat in New Zealand.

Always keep your gardening tools by the door, just in case another desperado thinks he can take what is yours.

Next I suppose rocks over 2” in diameter will all be required to be crushed.