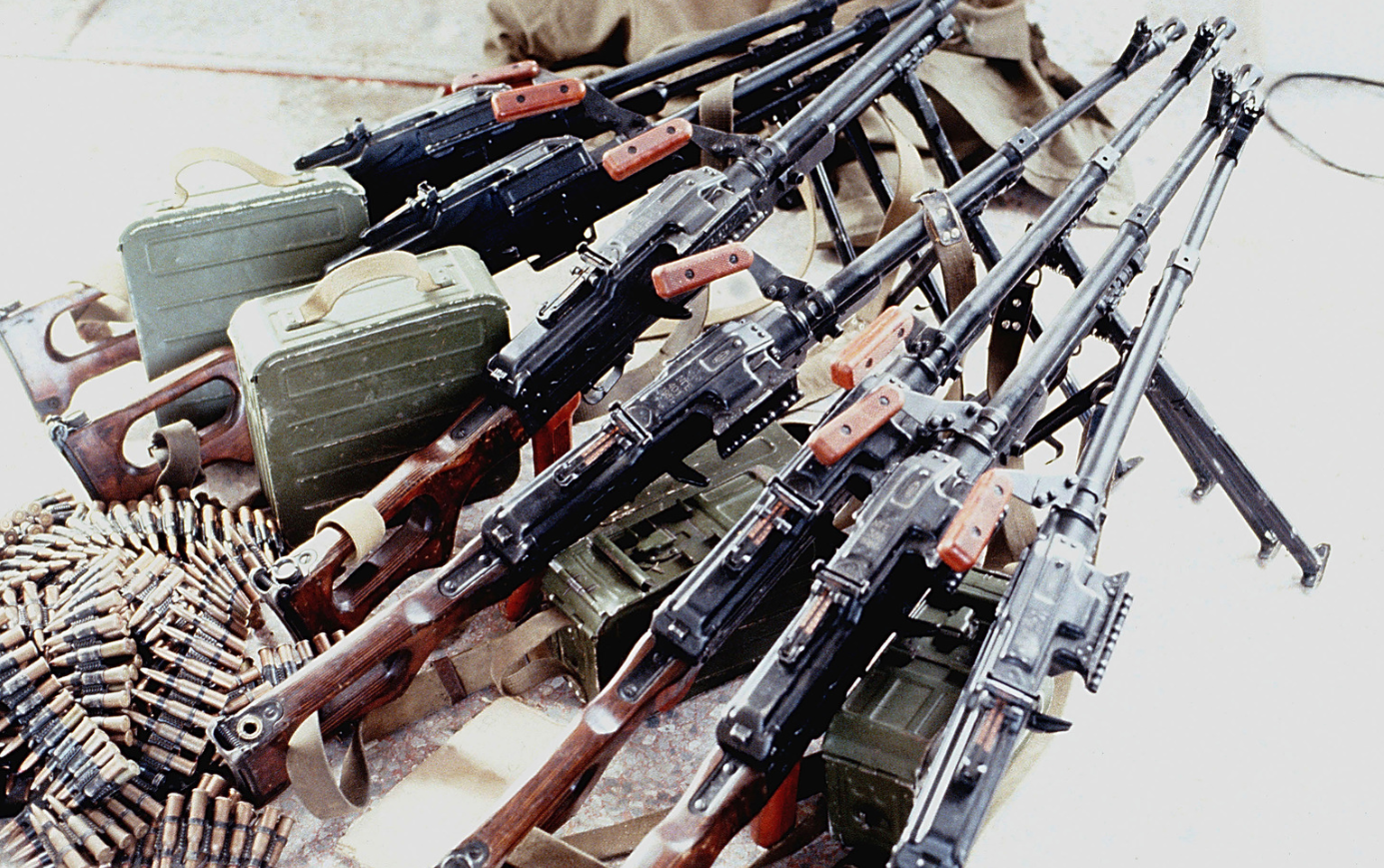 A few weeks ago we covered the initial story, that the government of Mexico is suing American gun companies over allegations that these companies were supplying cartels with the latest weapons although not directly. In the United States this would be classified as a frivolous lawsuit and it would be thrown out, gun companies do not control what people do with their firearms and can not be sued for the misuse of one of their products. Mexico does not prevent these lawsuits, and many gun grabbers would like to bring these back in America, this is why there lawsuit might actually do some damage.

The law firm representing Mexico, Shadowen PLLC, is cutting its rates in half and will only be charging $1,000,000 every year until the case is resolved. The law firm is slashing its rates from senior partners, $1,000 hourly rates cut down to $500, and will be cutting junior lawyer rates down to $275 an hour. The company has promised to bill no more than $1,000,000 every year when the contract starts, the company will officially start billing in 2022.

Proving once again, scumbag lawyers are the scourge of this country.

Couldn’t agree more with you. Let’s get rid of all the scumbag lawyers, starting with the prosecutors.

You know there’s one country that’s way ahead of us in that regard. China – where the criminal defense attorneys go to jail with their clients. Maybe you should move there.

What court in the US would hear this travesty of justice? How does the Mex government get jurisdiction over a US firm? IF someone brings a firearm into Mexico, how does that affect the sale? The sale didn’t happen in Mexico, it happened in the USA. The purchased firearm was TAKEN by a PERSON into wherever they wanted and the result was caused by a HUMAN and NOT the FIREARM. Look at all the deaths caused by AUTOMOBILES – OR is the accident caused by HUMAN driving the automobile? Same difference. If you are going to sue something, sue the maker of the AUTOMOBILES because of all the deaths they cause. Is that STUPID OR IS THAT STUPID?????

Valid. point. Of course cartel leaders could make the same argument. Hey we sold our heroin to somEbody else. Not our fault he smuggled it into the U.S. Also I agree with your point about automobile accidents By the same token heroin overdoses are not caused by heroin – they are caused by accidents by the users of the heroin or by the person who cut the heroin improperly and made it too strong. If you are going to criminally prosecute someone, prosecute the local dealer who didn’t properly inform the buyer of the strength of the heroin. Why blame the poor cartel leader? Is that STUPID OR IS THAT STUPID????

I consider the user responsible if they overdose. They decide how much to use. They can’t be sure of the potency, so they should start with a small dose to find out how potent it is, and increase it until they reach the amount desired. If the drug is higher potency than expected, then they made a better deal, as long as they don’t overdose by being stupid. Of course, they are doing hard drugs, so that brings us to the question of how smart can they be?

Heroin is Illegal. Guns and Cars are not.
Next?

It’s also illegal to go across the border with a firearm, so why didn’t MEX arrest the people crossing the border BEFORE they could use their weapons????

Because they were Cartel.

I think we should sue Mexico for all the crimes committed by their citizens that cross our border illegally. Besides if they are going to sue anyone it should be the US Government, due to the fact that they allowed all the firearms to walk into Mexico via FAST AND FURIOUS. They should also sue Obama, Biden and Eric Holder who allowed it to happen.

If you compare the number of people killed or maimed in the U.S. by Mexican citizens with the number of Mexicans killed or maimed by Mexican guns, what number do you think will be hire? Remember, regardless of whether it is legal to manufacture or sell guns in the U.S., it is illegal to smuggle them into Mexico. So those who object to this lawsuit are basically saying that if Mexico decided to legalize heroin, we would have no recourse against the cartels. Heck, the Mexicans are going easy on these guys. If they were like the U.S., they would be kidnapping gun manufacturers and returning them to Mexico in chains to spend the rest of their lives in jail.

“Mexican guns” should be American guns. Why can’t we edit?

and hire should be higher

Your premise is wrong – apples to oranges. The Gun Manufacture is not who is buying and smuggling. Mexico could legalize heroin, and many states “HAVE” legalized marijuana – It is Still Illegal to smuggle it either way. U.S. manufactured guns could be legally imported into Mexico and sold thru their “Licensed Dealer”.
7 weapons that the Mexican Government approved ownership for self-defense

Apr 2, 2019. Private ownership of firearms is restricted to the home only. (and restricted) There is only one gun store in the entire country, and it takes months of paperwork to have a chance at purchasing one legally

Your argument is a non sequitur.

Mexico must have taken lessons from the democrat party. They’re suing firms engaged in legal commerce in the U.S. for crimes committed by criminals operating in Mexico. Perhaps they should punish the cartels for crimes committed by cartel criminals or the smugglers who procured and re-sold American made arms. Prosecuting U.S. firms that manufactured instruments to be used by peaceable, lawful Americans engaged in self-defense against American criminals is quite a stretch, even for democrats.

They are just learning from the U.S. government which routinely CRIMINALLY PROSECUTES people in foreign countries for taking actions which are perfectly legal in their own countries, like for example prosecuting the CFO of Huawei for supposedly taking deceiving a British bank in Hong Kong into helping it do business with Iran in violation of U.S. sanctions, when of course China has no sanctions on Iran and the bank has never complained about being deceived.

The Global wire transfer system is built to go through the US Banking system.

Part of the US SPY PROGRAM.

That’s why the west is screaming and complaining about Russia and China creating their own global wire transfer system..

How modest…only $1 million a year. Better read the small print. They are, after all, lawyers and skanky ones at that if they are playing that game.

Maybe some folks in Texas can take these bloodsuckers out for a “long fishing trip” in a very leaky boat. You definitely can’t rely on sharks to eliminate them because they won’t attack out of professional courtesy.

If the cartels can not get weapons from one place they will simply go elsewhere. I am certain the Chinese will be more than happy to ship them weapons along with the fentanyl and precursor chemicals for meth production that they already ship to Mexico in vast quantities.

I hear Afghanistan recently came into a small cache of weapons. I’ve been checking Craig’s List, Kabul for a deal on a used Dbal3 or a Acog. 😉 + Mexico put themselves on the list to accept Afghan refugees. Now that’s rich !

They should sue oblamo for his fast and furious program to supply firearms to the cartels. Notice I said oblamo and NOT the federal gubbermint!

It’s OK, Biden will drop a $ billion on ’em to settle the claim. Hardly worth mentioning.

Messico needs to sue Ovomit and Holder, as it was they who devised the plan to walk guns into Messico (Fast and Furious) in order to artificially inflate the number of guns found at crime scenes that would trace back to the U.S.

Fast and Furious never intended the guns to be tracked, and it never informed our Agents in Messico nor the Messican gubmint of the plan.

During GW Bush’s tenure there was a similar plan called Wide Receiver, but it attempted to track the guns and our agents in Messico were informed of the plan as was the Messican gubmint. And when they lost track of a gun they shut it down.

I will gladly support the firearms manufactures in filing suit agsinst Mrcico for firearm, narcotic and immigration violations committed in the US in their name.