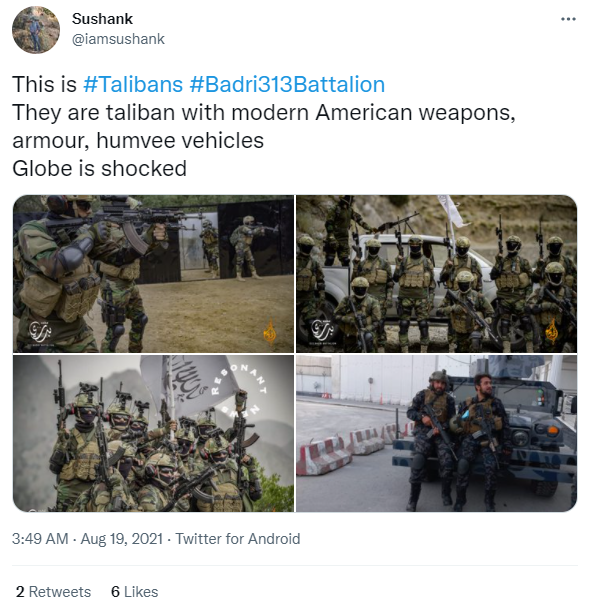 The collapse of Afghanistan is likely going to be a defining moment in world history when people look back at the 2020s, the Afghan military gave up before the fighting even started and the Biden administration left behind the latest military arms for the Taliban.

What exactly was left behind? We have no clue what the Taliban have picked up, that’s why a group of lawmakers is now demanding that the Biden administration provide detailed lists of what was given over to the Afghan government, what was destroyed prior to the withdrawal, all remaining operational equipment, and more.

The letter that was sent by lawmakers to the Biden administration was written by 25 Republicans, this group was led by Senator Marco Rubio (R-Fla). The list of demands can be read here:

1. A full account of military equipment provided to the Afghan Armed Forces in the last year.

2. All military equipment, owned by either the U.S. or Afghan Armed Forces, that was removed or destroyed prior to the U.S. withdrawal, or is rendered inoperable without U.S. logistics personnel.

3. All U.S. military equipment that remains operational in Afghanistan.

4. A list of what military equipment has been seized by the Taliban.

5. An assessment of how long it will take the Taliban to use each of the captured equipment.

6. An assessment of the likelihood that the Taliban will seek to work with Russia, Pakistan, Iran, or the People’s Republic of China for training, fuel, or infrastructure necessary to utilize the equipment they do not have the capabilities to use on their own.

7. Any efforts by the administration, planned or underway, to recapture or destroy equipment that remains in Afghanistan and is at risk of being used by terrorist entities.

This is what the group is asking for, we should get a full accounting of what the Taliban have in their possession in a few months. That being said, we have a pretty good idea about some of the weapons that the Taliban picked up.

Taliban soldiers are using social media to mock the United States and they are sharing several photos with American arms. Here are some of those photos: 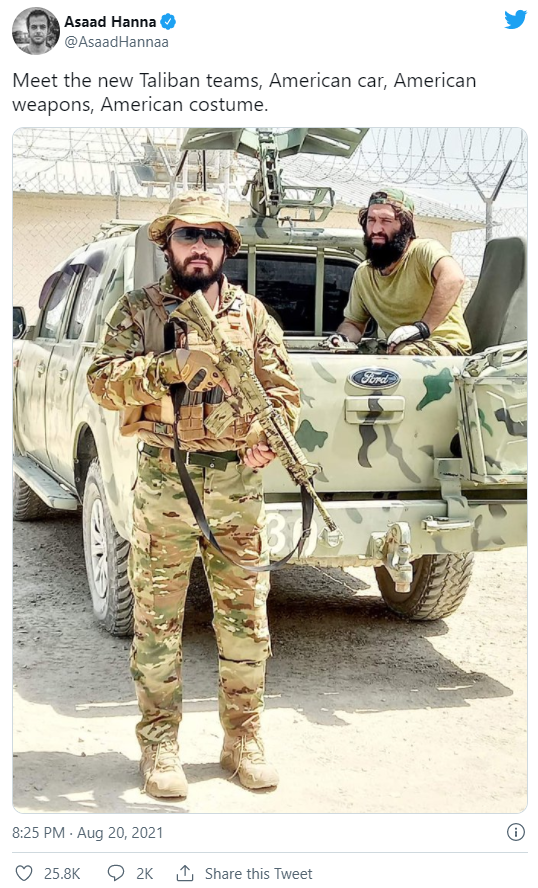 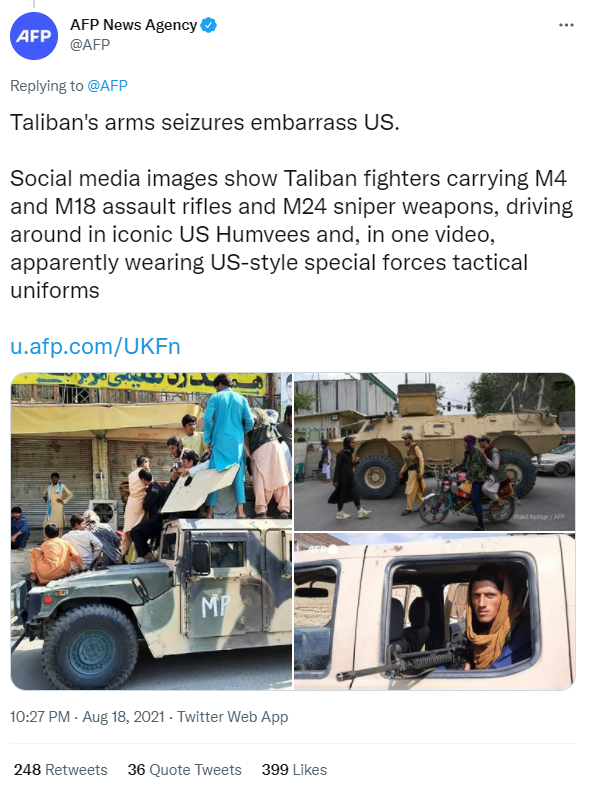 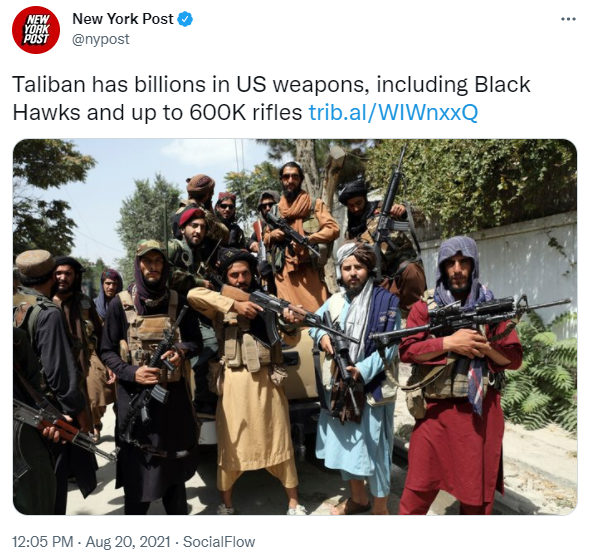 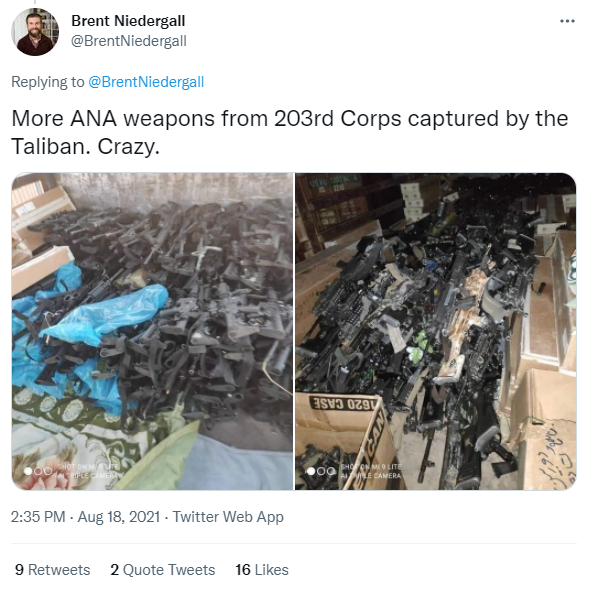 Among the many photos you can see Taliban insurgents with American rifles, armor, and other equipment. Most of this equipment is simple to operate and they are going to be able to use this equipment against the people of Afghanistan and any Americans still trapped in Kabul. Some of the high tech logistics equipment and vehicles are not going to see use any time soon, the Blackhawk helicopters that were stolen by the Taliban take years of training to operate and these insurgents are more likely to destroy them than use them to any success. That all would be true if it were not for reports that several members of the Afghan military decided to join the Taliban, the United States paid these people and trained them to use all of the relevant equipment mentioned above.

The arms left behind by the American military have made the Taliban a much greater threat than they were before, the decision to leave all of the equipment behind was one of the worst decisions made in this withdrawal form the country.

China and/or Russia will gladly train the Talis to operate any and all airframes the US abandoned.
600,000+ Small Arms “given” to the Talis. I don’t want to hear a single word about Gun Control from the Left.

Just me
Reply to  Bemused Berserker

Spot on! However, the demoscum will blame the law abiding gun owners of the US for the bloodbath in Afghanistan.

I hadn’t thought about that, you are ABSOLUTELY RIGHT!!!

This is much to much, the INSANITY of it ALL!!! As much as I hate the ENTIRE bid en/har ris COMMUNIST REGIME, this CATASTROPHE is beyond comprehension!!! Also this time the highest 3 levels of the Pentagon f d up, beginning with milley and austin!!! YES PRESIDENT TRUMP, WE DO MISS YOU!!!

Biden just “executive order’d” the banning of ammo importation from Russia (the main source of 7.62X39 ammo used in the AK-47/AKM series and clones, as well as the sole source of 5.45X39 ammo for the AK-74 and knock offs), because, well, it’s very dangerous for Americans to have access to this stuff. Very dangerous. 600-700K modern “assault rifles” (REAL “assault rifles”, not the stuff I can buy) in the hands of the Taliban and ISIS and Al Qaeda? Well, that’s okay… I can’t buy a single shot, 40mm grenade launcher (like I used during that farce in SE Asia – you know, the one where we practiced helicopter evacuation from the American embassy in preparation for Biden’s “Presidency”…) but it’s okay to leave hundreds of M-19 40mm “machine guns” (and hundreds of thousands of rounds) for the Taliban and their friends. I mean, you know, if Americans were reasonably armed, maybe the Capitol Police wouldn’t be quite so quick to gun down unarmed, female veterans because they happened to be on public property that Nancy Pelosi didn’t want them on and that would be a “bad thing” (of course, she also didn’t want the National Guard, whom she’d called in to protect her, on that property either, so she made them go stay in an unheated parking garage with one restroom for 5,000+ personnel; I guess they should count themselves lucky that she didn’t have her Capitol Police goons fire on them, too). Police shootings are only objectionable when aimed at convicted felons.

Perhaps Biden doesn’t want any competition for the supply of Russian ammo, so more can go to the Taliban.

Perhaps the Taliban can get China to provide them some black 10 gallon cowboy hats to go with their new outfits. They would look sporty and would stand out when we need to go back to take up where we left off…never mind, I guess we’ll just have to start over again. But, either way, the hats would help identify them. And maybe we can get Kevlar white cowboy hats for our troops to help prevent friendly fire incidents.