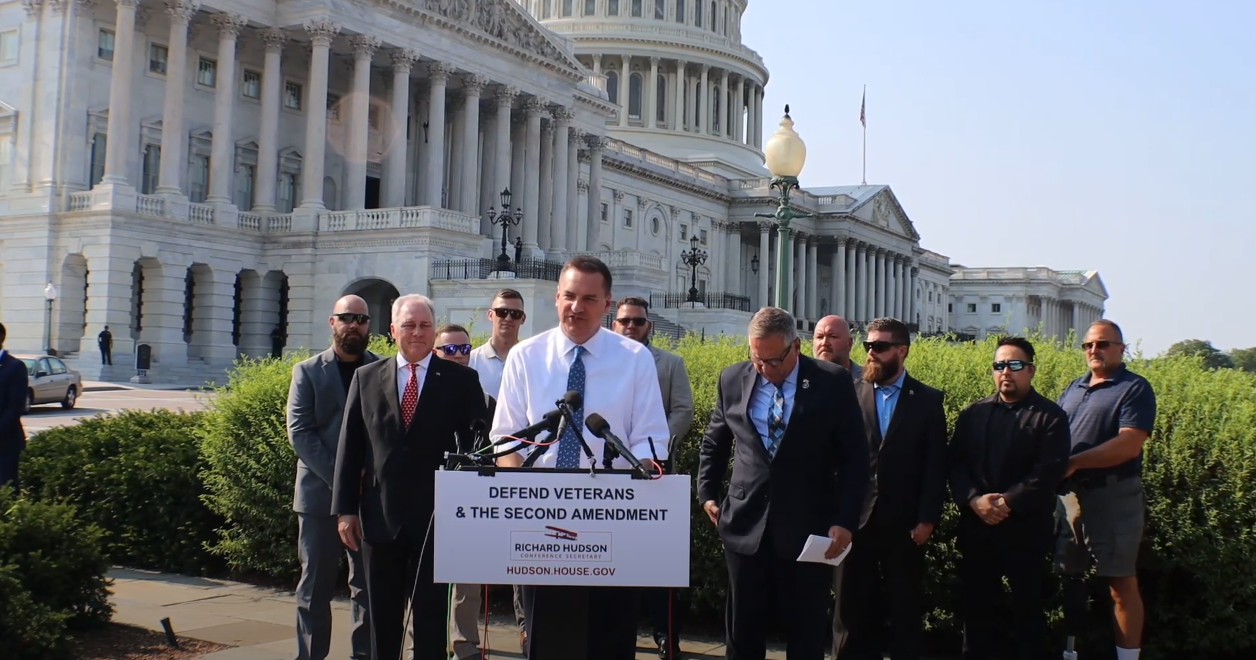 A group of Republican lawmakers was joined by veterans on Capitol Hill to call out the Biden Administration over the new ATF rules regarding stabilizing braces.

United States Representatives Richard Hudson (Nc), Steve Scalise (La), and Mike Bost (Il) meet up with a group of veterans for a press conference on Capitol Hill. The press conference aimed to call out the Biden Administration for the new rules on pistol braces/stabilizing braces coming out of the Bureau of Alcohol, Tobacco, and Firearms. Lawmakers stood alongside veterans and denounced the rule changes on the grounds that they not only threaten the 2nd Amendment but they jeopardize the ability of disabled veterans to exercise their 2nd Amendment rights.

It has been stated before that this proposed rule change by the ATF will affect many of America’s disabled veterans. The point of this press conference was to bring this more awareness to this issue.

More on the story from Guns.com:

“The ATF proposal could hurt thousands of law-abiding, gun-owning veterans simply because they use a stabilizing brace,” said Bost, the senior Republican on the House Veterans Affairs Committee. “Disabled veterans have given their country enough. The last thing they should be subject to is absurd fines and government overreach.”

Among those who spoke at the event was retired U.S. Army veteran Rick Cicero. Injured in 2010 by an IED in Afghanistan that caused significant damage to his right leg and right arm, Cicero subsequently helped design the first stabilizing braces with fellow paratrooper Alex Bosco and wrote the initial training guidelines with Sig Sauer Academy to use them.

“Stabilizing braces gave me the ability to get back out and shoot things that I never expected I would be able to again and my life changed drastically,” said Cicero. “Since then, I have been traveling across the country teaching veterans how to shoot again. That brace is the foundation of everything I do because I can take someone who has limited strength in their hands or is missing digits and give them confidence and the skills and capability to grasp a firearm again and get them back to the things that were such a part of their life.”

The ATF/DOJ’s rule changes are Unconstitutional. Only Congress has the authority to make/change Laws!

GOP are at it again, pandering the veterans. Not because they care for them but because it’s a selfish political attempt.

Tony, be very careful what you say. You have no idea what you are talking about. If not for Conservative American Patriots, the veterans would have NOTHING! You know what? BITE ME!

And how many years service in uniform did you perform, which wars were you in, what is your disability rating, how much extra metal are you carrying, how many years of your life expectancy did you lose to tropical diseases, frostbite, dengue?

Just me
Reply to  Tony Barreda

No, fool, they are standing up for every Americans second amendment rights unlike China Boy Groper Joe Bribedem. His gun grab efforts are worse than Oscumma.

But no where in the Constitution do I find that Congress has the authority to violate the 2nd Amendment.

Actually, Congress can pass a law but cannot change the Constitution alone. The laws that change the meaning of the freedoms spelled out in the Constitution cannot stand. Our problems are we respond to these changes thus giving them a right. For example we accept the law that we must allow a background check before buying a weapon…By applying for a clearance to buy one you have given your permission that they have that authority. These laws are not in compliance with the words used in the Constitution because they are open to interpretation by their very nature. The federalists papers were written such that they tended to explain the Constitution. Remember many of our settlers had no education. Today many persons would like to return to the times where you knew only what the teachers (enslavers) wanted you to know.

ATF would be better as the name of a Convenience Store

I guess we know what political party you align with huh Tony. I see nowhere here that the GOP is using anyone. They are simply and rightfully supporting the men and women who have served to protect this country…especially disabled veterans who have sacrificed more than anyone. You owe then a great debt of gratitude for ensuring your right to speak freely even though you sentiment is vastly misplaced. Let me remind you of the ongoing campaign by the liberal left to denigrate veterans at every turn as well as attempt to keep them from owning firearms at all! It’s disgraceful, and so are you!

The BATFE/DOJ Along with the FBI, CIA, NSA Have Gone so Far Off the Rails They are No Longer Justified in Their Continued Existence!

The ATF rule states that a pistol is designed to be shot “Single Handed” ->
Yet a Federal agents qualification test have agents shoot a total of 12 rounds Single handed from 3 YARDS- . Stage 1 & 2.
> Stage 3 thru Stage 8 (48 rounds) are all “BOTH HANDS” from 5 yards to 25 yards.
Just a bit of hypocrisy here ! Qualification needs to be all 60 rounds single handed if they change the Pistol brace ruling.

I’d add that a former U.S. Representative (D-AZ) lost the use of her right arm when shot by a deranged killer. She now practices at the range with her left arm alone and it must be exhausting. I believe she’d find the pistol brace a helpful apparatus and would oppose this new ATF rule. On the other hand, the optics might not be compatible with her agenda.

Gene, while I applaud your post, optics are on your Rifle or the bridge of your nose….

“the optics might not be compatible with her agenda.”….

No actually the Appearances are definitely Not compatible with her Proposed agenda,
They are the demonRAT agenda, of “Rules for Thee, but Not for Me”

With age comes shaking. I have used a brace (made in my wood shop) for years. I was not even aware that you could even buy one. BUT, there is no excuse for the government (at any level) to pass a law overriding our Constitution. There are unambiguous words set aside to be explicit in the freedoms we have that were so important the framers spelled them out. Please tell the thought police to read what the word unambiguous means.