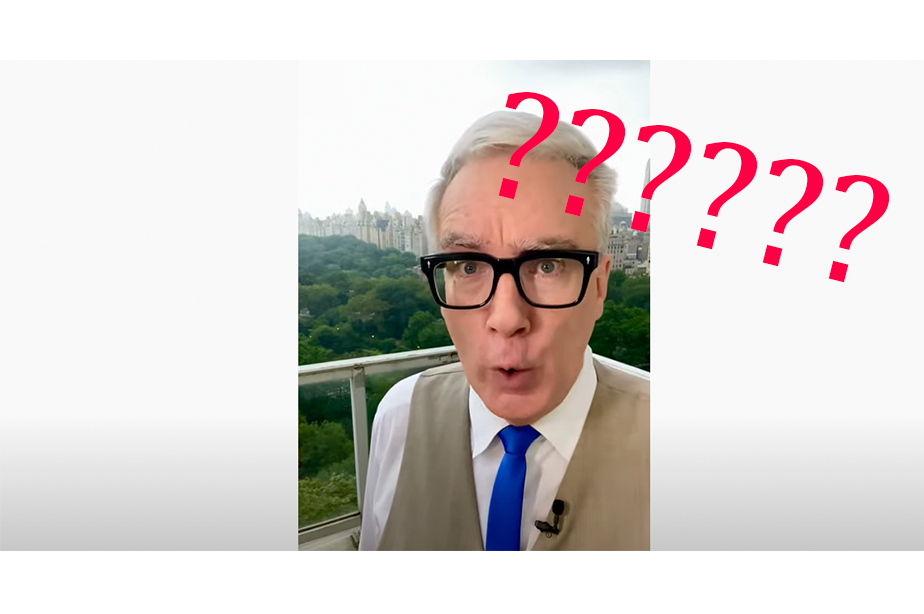 From The Washington Times:

The left-wing former ESPN and MSNBC commentator unveiled a novel argument for the constitutionality of gun control — that the Second Amendment doesn’t use the word “own.”

Mr. Olbermann made his legal claim in a video he posted to Twitter on Tuesday afternoon before that evening’s baseball All-Star Game in Denver, where authorities had earlier arrested four people over a stash of long guns and ammunition.

“Consider again the holy Second Amendment to the Constitution and ask yourself this question. Why doesn’t the 2nd Amendment have the word ‘own’ in it? Why does it not say the right to own guns or a synonym for own?” he asked sarcastically before reciting the existing amendment.

NEW VIDEO: Whether or not you’re going to watch tonight’s baseball All-Star Game, consider that they may have broken up a planned mass shooting there.

And ask yourself: why doesn’t the 2nd Amendment have the word “own” in it?

The 2nd Amendment does NOT authorize gun OWNERSHIP! pic.twitter.com/4cLrNsCKXy

A well regulated Militia, being necessary to the security of a free State, the right of the people to keep and bear Arms, shall not be infringed.

“The right of the people to KEEP and BEAR Arms”

It does not take a genius to figure this one out, Olbermann is mistaken in his belief that this means American’s can not own guns. This is an insane argument to make and shows either willful ignorance or an extremely low reading level on part of Olbermann.

What else would anyone expect from an asshole like Olbermann! Nothing but a wacked out unhinged liberal loon! Kiss are collective asses Keith old boy! Lol

Keep saying a lie long enough, and the apathetic masses will soon come to believe it.

It Worked for the Nazi & Stalin the Ancestors of Today’s Democrats so of Course They continue to Use the Tactic!

Who cares what he thinks??? Or even IF he thinks… (doubtful…)

If he can’t even keep a job at way far left ESPN, you know he’s too whacked in the head for anyone to listen to. But we’ve known that for years.

Keith “Bathtub Boy” Olbermann. is just another pathetic, unhinged lefty loon, as he’s displayed for years with his moronic rants in between his numerous firings from various news and sports channels..

Olbermann always talks a big game, often making threatening remarks directed toward conservatives. He’d likely soil his pants if he ever actually confronted a true patriot, right before having his wimpy little liberal ass handed to him.

Since Olbermann is obsessing over guns, here’s a brief digression regarding the 2nd Amendment. It does not say the right of the people to keep and bear “guns” shall not be infringed. Throughout our Constitution, the terms were very carefully chosen and debated extensively and for years among all the colonies. When ratified, the term “arms” included crossbows, slingshots, spears, bludgeons, swords, daggers and according to Jefferson, it also included naval cannons.

The definition has not changed except in the democrat mind. It always makes me cringe when democrats assert their absurd notions about gun control, gun violence, gun safety, gun laws, gun sense, gun rights, gun policy, gun reform, gun measures, etc. Literate people don’t say “dis-gun” the enemy. In fact, neither the term “gun” nor “firearm” appears in the Constitution.

And worse, conservatives simply parrot the terms chosen by democrat fools who rapidly are becoming enemies of the state.  We need to choose our own terms and assert our human rights accordingly. That said, we’re speaking of “arms” owners in the broadest sense. And before the democrats shriek hysterically, nobody reading this is stupid enough to believe it’s practical for an individual to own a naval cannon.

There are all kinds of “guns” and those of us who cling to conservatism should reject that any suggestion containing the term, refers to a firearm. Just off the cuff, I’m thinking of the grease gun, glue gun, heat gun, staple gun, soldering gun, nail gun, caulk gun, et al. No offense intended.

He is Trying to Sway the Low IQ Folks out there! The Ones with Brains knows He’s Full of *hit!

I’ve often wondered why any reputable news outlet, blog etc. would descend Olbermann’s level and give him time and space to spew his nonsense.

“Keep” is a synonym for “Own” Olbermann you Moron.

“This take proves Olbermann has a 2nd-grade reading level and nothing hire.”

Spell check doesn’t check grammar or correct word usage. I am amazed at how often I see the words there, their and they’re used incorrectly in postings. And yes, it shows lack of education or just plain ignorance.

Also include there. Apparently our educational system stopped teaching usage, grammar, punctuation, spelling, writing, etc. a few decades back. I read a fair amount of print media and note that even “professional” writers’ works are spiraling downwards…rapidly. Our language, English, is dealing so rapidly we will soon communicate by a series
of grunts, whistles, farts, burps, and belches, similarly to cavemen…sorry, cavepersons.

No, this A$$ Clown is NOT mistaken. The Marxists deliberately parse words and twist meanings to suit their purpose to subvert the United States Constitution. Don’t believe that they are “mistaken”…..they know exactly what they are saying.

Olbermann’s lack of logic is comical. It is akin to saying only those who steal guns can lawfully carry them. Those who own them do not have that Right.

Apparently Mr? Oldummiebrman knows not the english of the time the 2nd amendment was written, keep was a word meaning ownership, bear is to carry as necessary to use for defense and offense. My third grade education taught me that.

“authorities had earlier arrested four people over a stash of long guns and ammunition.”

Ownership of 4 rifles and ammunition is cause for arrest in Colorado?

OK. 4 people over a “stash”. What constitutes a “Stash” and why is it illegal?

Its interesting that he incorporates the concept of “own” in his Second Amendment “argument”. Because he has some numbers on a statement from his bank, does that mean he “owns” the money therein ?

“nothing hire.” In a sentence where you talk about his reading ability? Is that a joke? You do know it is HIGHER, right?

What a dip shit

Keith…if you do not own it how can you keep it?

Like we need another ☝️of these lib-turd ‘geniuses’ who’s frickking mothers should’ve been Pro-choice, ‘to explain’ the Constitution, to us❓He should stick “to stuff” he knows/understands like Alinsky’s Handbook…

Olberdork’s parents need to demand a refund from whatever Ivy League Dunce House they sent him to.
“Keep” is a Synonym of “Own,” and vice versa, in every Thesaurus I own.

Dude sucked as a Sportscaster too.

Olberman”s idiocy would recognize one to keep and carry (bear–not the animal) a borrowed weapon or a leased one.He is a thimblewit git.

GG Garrett Should have stopped the sentence at Keith Olbermann doesn’t think!

It doesn’t mention all the synonyms because it was intended to be read by grownups and not 3rd graders or those who didn’t pay attention in their advanced grades. Little Keithie doesn’t yet see the connection between “keep” and “own.” Perhaps he believes those who exercise their 2nd Amendment rights intend to simply store government arms or permanently borrow them.

Regardless, those who believe in the 2nd Amendment fully intend to keep their arms and they fully intend to bear them wherever the Constitution doesn’t forbid it. Most keepers and bearers would love to see him personally infringe on their rights. Little Keithie has a 2nd rate education with a 3rd rate mind. If he had paid attention in reading class perhaps he’d have seen the 2008 Supreme Court opinion.

In D.C. v. Heller, it discussed “well regulated militia” (known as the “collective rights theory” and referring to a state’s right to defend itself). It focused on the “individual right to possess a firearm unconnected with service in a militia.” I wonder if Little Keithie believes a difference exists between “possess” and “own.” Up next? He’ll roll out an argument regarding the definition of “unconnected.”

This moron is completely eat up with stupid.