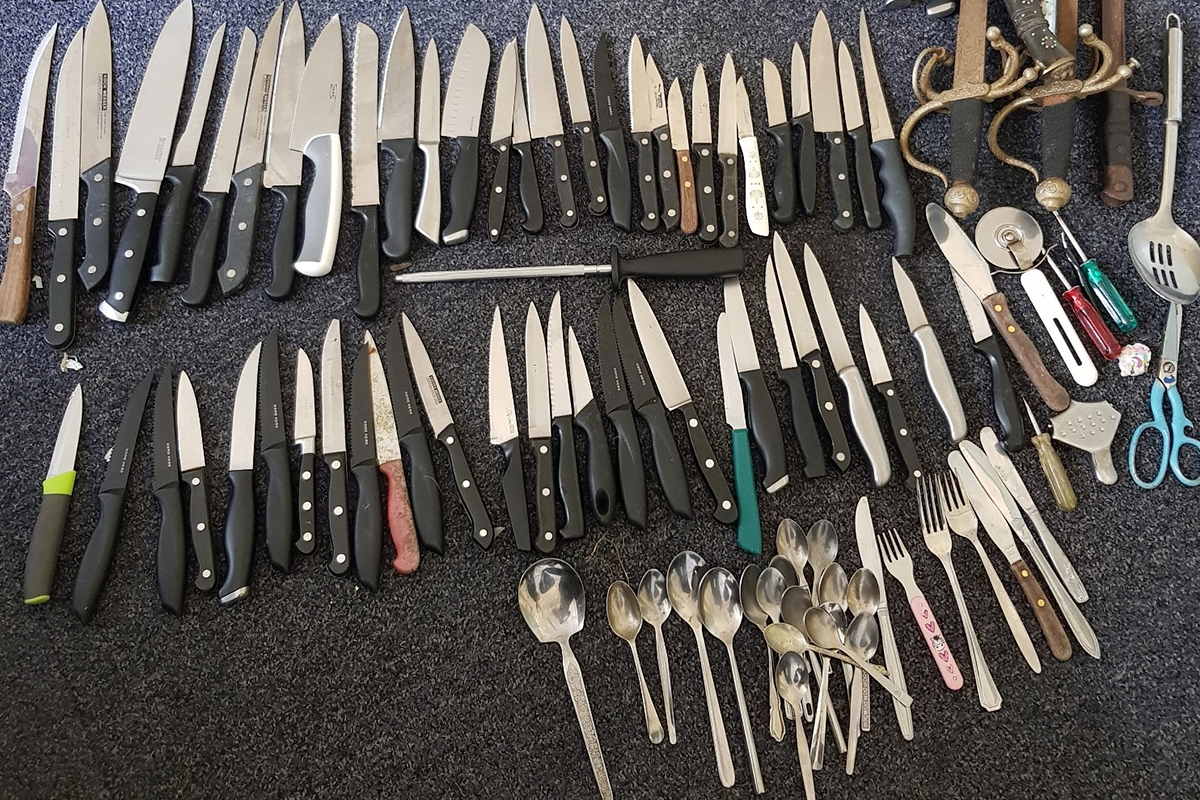 Photo from the Burnley and Padiham Police department
July 13, 2021 By Full Mag Staff

The UK is going forward with more knife amnesty programs, these are a lot like America’s gun buy-back programs but those who turn in blades are not awarded any form of compensation.

Recently a local police department in the country boasted about the numerous “weapons” they had picked up, needless to say the photos they shared showcase anything but weapons.

You can see the above post features a whole district’s worth of kitchen equipment. There are no daggers or switchblades, these two things could be considered weapons.

You can see a couple of ornamental swords in the photo, I guess you could use one of these as a weapon. There is also a bayonet in the top right, it probably belonged to a long-deceased family member who fought in one of the World Wars and was hung up on a wall. In the post itself, the police point out that the screwdrivers were a big pick-up at the event, the screwdriver has been a well-known weapon of war for most of history so this makes sense.

Another point of interest is the assault knife or Pizza cutter in the photo, someone could have done some real damage with this thing. If you look at the photo for a few minutes you might notice the collection of spoons towards the bottom, these are considered weapons of war and should be outright banned in the USA.

Jokes aside this really is a pathetic display, but it is one we can learn from.

In all likelihood at least one of these knives was used in a crime, stabbings are commonplace in the UK. The criminal who used one of these knives for the purposes of crime will get off scot-free because of how easily he was able to dispose of the knife. What needs to be said here is that despite the UK’s effort to ban knives as more and more stabbing occurs they still have stabbings and people are still getting knives despite the laws designed to curb your ability to buy knives.

Gun control is no different in the United States. Weapons, tools, guns, and kitchen equipment are not the cause of crime, these things are implements of crime. Gun control fails philosophically, criminals will find a way to commit crime regardless of the law, and punishing law-abiding citizens is in no way a solution to crime.

Knife control is what comes after gun control, crime will still occur and the goal post will need to be pushed once again. This goal post will keep going until you have no rights and own nothing.

After the kitchen cutlery comes the gardening tools. 🙁

yes ! once upon a time gardening tools were a weapon of war !

Pitchforks might be making a comeback before too long.

How in heck do Brit’s cut their steaks? Eating dinner must be a real challenge over there.

OMG there goes my toilet paper and garden hose! My crime spree ended before it began!

Don’t laugh remember an old process was beating with a rubber hose.

Reminds me of Wounded Knee…

Plastic knifes are the answer, come on man,ya know the thing, dementia, joe says, u can’t hurt someone so bad, stick in the leg,right? Then we can keep them legal,da? What’s next with these crazy loonies?

Guess these Brits would freak out in my house. I collect knives as instruments of survival, I have more that 150 just in my bedroom dresser drawers. So woopdedoo you Brit idiots.